Realme India CEO Madhav Sheth has put out a statement that the launch of Realme X50 Pro 5G will now take place online. 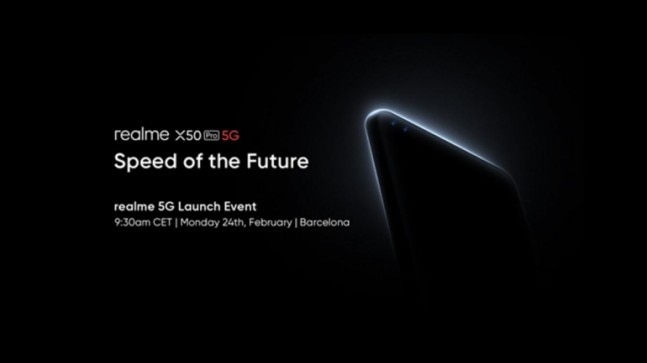 The Realme X50 Pro 5G invite sent before the MWC 2020 got cancelled.

In the wake of the Coronavirus outbreak across the world, the mobile phone body GSM Association announced to call off the biggest tech event, Mobile World Congress this year. The decision followed a series of withdrawals of major tech companies as a preventive measure. Despite the lacklustre that MWC 2020 was going to witness, a few companies such as Realme and Xiaomi were still attending the tech conference before it got cancelled. It would have been Realme's first MWC event where it was slated to launch its new 5G phone, the X50 Pro 5G. Post the cancellation of MWC, Realme has made some changes to its plan of going global and shifted the launch to be held via an online event.

In a statement, Realme India CEO Madhav Sheth has expressed his concerns over Coronavirus, outlining the impact it has caused to the launch of Realme X50 Pro 5G. "In view of the current scope and extent of the Coronavirus, and in order to ensure public security, as it was just announced that MWC Barcelona 2020 was cancelled, we regret to inform you that realme has decided to cancel the participation at MWC Barcelona 2020 accordingly. Realme X50 Pro 5G, originally planned to debut at the MWC, will not instead be launched online globally in Madrid on Feb. 24th local time," wrote Sheth.

In concern with the public safety and cancellation of #MWC20 at Barcelona, we have decided to shift the launch of #realmeX50Pro 5G to an online global launch in Madrid on Feb 24th.
Will also reveal something special with it for Indian customers. pic.twitter.com/bgJOWF0Kmx

The Realme X50 Pro 5G will be the brand's second 5G smartphone that will pack top-of-the-line specifications. It has been confirmed to come with a Qualcomm Snapdragon 865 processor, support for 5G, up to 12GB of RAM and 256GB of UFS 3.0 storage, and Android 10-based Realme UI. Other details, such as those of its cameras, are yet to be revealed. In any case, the Realme X50 Pro 5G will be a flagship smartphone, expected to take on the likes of OnePlus 7T Pro.

Talking about the impact of Coronavirus on the tech world, tech companies including Facebook, Sony, Amazon, Vivo, Nokia, Ericsson, Nvidia, Intel, and Cisco among others decided to pull out of the MWC 2020 over public safety. Not only major events like MWC, but normal operations of the brands have also hit a snag. The manufacturing of smartphones by a good number of smartphone brands is carried out in China, which is the epicentre of the Coronavirus outbreak. Due to quarantines imposed across the country, the production has been halted, which will ultimately affect global businesses.