The Realme X50 PRo 5G is scheduled to be launched on February 24, with the latest teaser confirming that the device will bring with it a 90Hz Super AMOLED display. 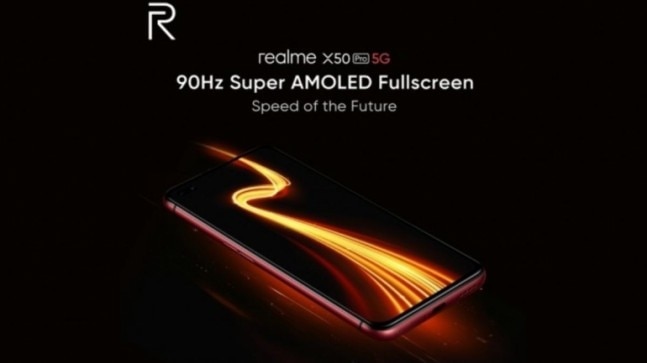 Realme's upcoming flagship, the X50 Pro 5G has been in the news off late with company teasing it a number of times over the last few days. And now, a teaser has appeared that reveals more details about the smartphone.

The Realme X50 Pro 5G smartphone is scheduled to be launched later this month, and the latest teaser revealed by the company's European Twitter handle has confirmed that the device will bring with it a 90Hz Super AMOLED display.

Ahead of its launch, the company has been drumming up interest in the smartphone and has previously revealed some other crucial details about the device, including the fact that the phone will come powered by Snapdragon 865. A previous teaser had also confirmed confirms the Realme X50 Pro 5G will feature 65W SuperDart Charge technology.

The information was shared by Realme Europe in a tweet which teased the battery charging prowess of the X50 Pro 5G. The SuperDart Charge term was spotted in a patent filed by Realme last year. The 65W fast charging capability is expected to be similar to Oppo's 65W SuperVOOC 2.0 Flash Charge technology, which is claimed to charge a 4000mAh battery from zero to full in 30 minutes. In fact, one of the early rumours on the Realme X2 Pro had suggested it would sport 65W fast charging technology but instead, just the 50W version was launched.

Apart from this, the Realme X50 Pro 5G is likely to pack a dual punch-hole camera setup on the front. Realme's event microsite on its Europe website shows an outline of the top portion of Realme X50 Pro 5G, wherein two shimmering cavities can be seen. The punch-hole setup will be on the left side of the display. The presence of a dual punch-hole setup was also confirmed by the screenshot of Realme X50 Pro 5G's 'About Phone' screen, previously shared by Realme CMO Xu Qi Chase. The same screenshot also revealed that the smartphone will have at least one model with 12GB of RAM and 256GB of internal storage. The smartphone will run Android 10-based Realme UI out of the box.

ALSO READ: | Reliance Jio, Airtel and Vodafone's yearly prepaid plans will help you save money: Here's how
ALSO READ: | 5G rollout in India may face potential delay due to Coronavirus
ALSO READ: | Xiaomi Mi 10 may launch in India but it could be more expensive than OnePlus 8
Tags: Realme X5O