Realme X50 Pro 5G launch is now scheduled to launch at an online event on February 24. 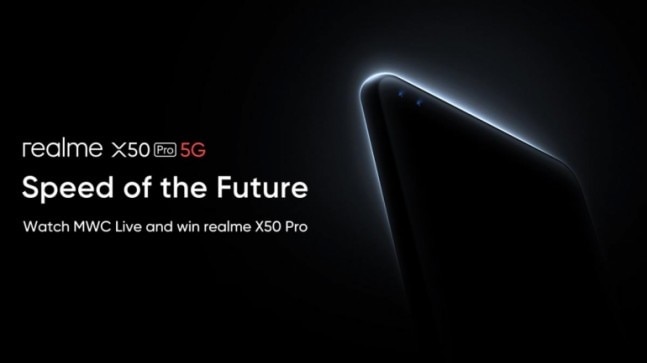 Despite the cancellation of the MWC 2020, Realme is moving ahead with the launch of X50 Pro 5G, which was originally scheduled to debut at the tech conference in Barcelona, Spain. The company has said it will hold an online event in Madrid where the Realme X50 Pro 5G will be officially launched. Ahead of its unveiling on February 24, Realme X50 Pro 5G has been teased to pack a Snapdragon 865 processor and support for 5G. A new teaser now confirms the Realme X50 Pro 5G will feature 65W SuperDart Charge technology.

In a tweet, Realme Europe has teased the battery charging prowess of the X50 Pro 5G. The SuperDart Charge term was spotted in a patent filed by Realme last year. The 65W fast charging capability is expected to be similar to Oppo's 65W SuperVOOC 2.0 Flash Charge technology, which is claimed to charge a 4000mAh battery from zero to full in 30 minutes. In fact, one of the early rumours on the Realme X2 Pro had suggested it would sport 65W fast charging technology but instead, just the 50W version was launched.

Moreover, the Realme X50 Pro 5G is likely to pack a dual punch-hole camera setup on the front. Realme's event microsite on its Europe website shows an outline of the top portion of Realme X50 Pro 5G, wherein two shimmering cavities can be seen. The punch-hole setup will be on the left side of the display. The presence of a dual punch-hole setup was also confirmed by the screenshot of Realme X50 Pro 5G's 'About Phone' screen, previously shared by Realme CMO Xu Qi Chase. The same screenshot also revealed that the smartphone will have at least one model with 12GB of RAM and 256GB of internal storage. The smartphone will run Android 10-based Realme UI out of the box.

Samsung Galaxy Z Flip: The good, the bad and the ugly