Realme India CEO Madhav Sheth was snapped wearing the company's upcoming fitness band. Its launch is due sometime in February. 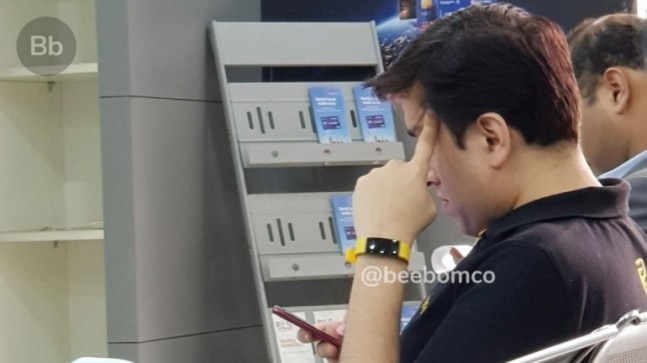 Realme's fitness band has managed to build the hype as expected after a glimpse of it was shared at last year's Realme 5i event. The company's India CEO Madhav Sheth recently confirmed that the fitness band will be launched sometime next month. Now, ahead of its February launch, the Realme band was spotted in action, worn by Sheth, giving us a preview of what its real-world look will be. The Realme band can be seen a yellow colour along with a rectangular display.

Beebom managed to snap a photo of Sheth, who was waiting at the Spanish Visa office in Delhi, wearing the band on his wrist. The band has a yellow-coloured strap and a rectangular display curved at the edges. The display was not lit, which makes it difficult to assume if it's a colour panel or a greyscale one. This also means the interface of the fitness band remains a mystery until, probably, when its launch happens.

The Realme fitness band was announced last year in December but no release timelines were shared back then. There has been a lot of anticipation on when the band will be out and what it is going to be called. Since the band is expected to target the affordable price segment, it is pegged to take on the Mi Band 4 and Honor Band 5, which were recently launched in the Indian market. Alongside the fitness band, Realme is likely to launch its fitness app that will be used for pairing purposes.

The wearable market in India is booming by the day, having generated total revenue of $1,556 million in India at the end of December 2019, as per a report by Statista. IDC, in its quarterly survey for Q2, 2019, revealed that the market for wearable devices in India recorded a growth of 30.9 per cent Quarter-over-Quarter (QoQ) and a jump of 123.6 per cent from the same time one year ago. The shipments of wearables reached an all-time high of 3 million, catapulting India's rank just behind the US and China in the world.