The Redmi K40 launch has been confirmed for February 25 by Redmi General Manager Lu Weibing through an image posted on Weibo. 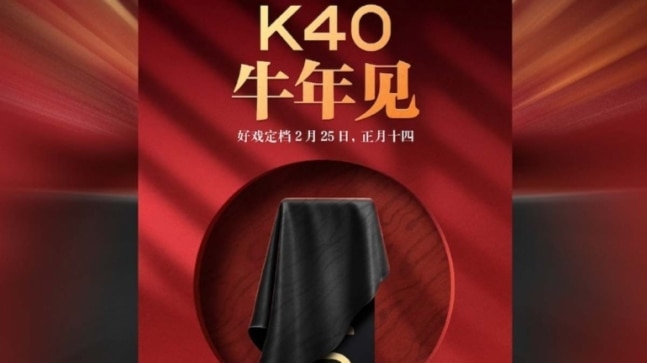 The image posted by Weibing reveals the retail box of the Redmi K40.

Days after launching flagship Mi 11, Xiaomi is set to unveil an affordable Redmi K40 with the same Snapdragon 888 SoC. The Redmi K40 launch has been confirmed for February 25 by Redmi General Manager Lu Weibing through an image posted on Weibo. The new Redmi phone will debut as the successor to the Redmi K30. To recall, the Redmi K30 was launched in December 30. The company is also expected to launch a Pro model of the Redmi K40. However, there is no official word on the same.

The image posted by Weibing reveals the retail box of the Redmi K40. The Xiaomi execute also said that the new smartphone will come with a brand-new design, new positioning, and a good experience. There is still no word on the India launch of the smartphone.

The smartphone will come with a starting price of CNY 2,999 (around Rs 34,000), Weibing had revealed last month while confirming the launch. The smartphone will be more aggressively priced than the Mi 11 which is powered by the same processor. However, the exact pricing along with the configuration will be known only on February 25.

Little is known about the phone's specs. However, Weibing has already confirmed that the Redmi K40 will have a centre-positioned punch-hole display to house the selfie camera. He said that this has been done in a bid to achieve highest possible screen-to-body ratio and this is why Xiaomi is also looking to introducing the smallest punch-hole cutout seen on a phone yet.

This will also be a shift in the design language adopted by Xiaomi in the past. The previous generation Redmi Redmi K30 Pro and K30 Ultra featured a pop-up selfie camera module.

Along with the hole punch design, Weibing also revealed that the phone will come with a smallest" selfie camera hole, stereo speakers, and a "great" battery life. It will be powered by Qualcomm's Snapdragon 888 SoC. It can feature a flat display that may have a full-HD+ (1,080x2,400 pixels) panel. The smartphone is is tipped to have 33W fast charging support. The battery backing the phone could reportedly be a 45000mAh pack.