An image of Redmi Note 10's retail box gives further idea about what to expect from the upcoming smartphone. Few details are actually surprising. 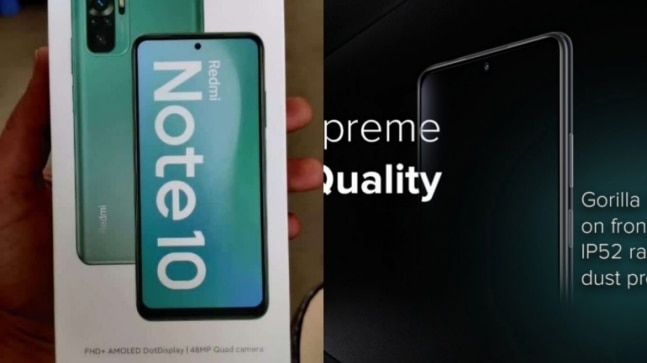 It will have a hole-punch cutout and a full HD+ resolution.

Only few days back Xiaomi had put out a tweet asking its fans to choose between LCD and AMOLED displays for the Redmi Note 10 series. The first was combined with 120Hz refresh rate. The tweet was deleted as more people voted for an AMOLED display. This made lot of them believe that the Note 10 series will come with LCD screen.

However, the retail box of the Redmi Note 10 series says that the budget smartphone will come with an AMOLED display. It will have a hole-punch cutout and a full HD+ resolution. This could actually be a huge jump for Xiaomi which has been using LCD displays on most of its smartphones. The retail box also confirms the presence of a 48-megapixel rear camera setup on the smartphones.

Interestingly, Xiaomi chief Manu Kumar Jain had recently put out a tweet reminding users that Xiaomi has been upgrading the cameras on the Note series. He highlighted that the Note series brought the 48MP and 64MP sensors to the budget category and asked fans to predict what's next. This means that Xiaomi might introduce 108-megapixel camera on the Redmi Note 10 series. However, it could be reserved for the Pro Max model.

The leaked image of the retail box also gives an idea about smartphone's design. The Redmi Note 10 series will feature a rectangular camera module at the back. It will come with a new Evol design, as already confirmed by the company. It has already been confirmed that all smartphones of the series will be powered by Qualcomm processors.

Last year's entire Redmi Note 9 family was powered by the same Snapdragon 720G processor. It will be interesting to see if Xiaomi uses the same processor on all the smartphones this year or decides to go with different chipset for each model.