Upon its launch, the phone would most likely be presented to Indian buyers as a slightly toned-down version of the Redmi Note 9 Pro. 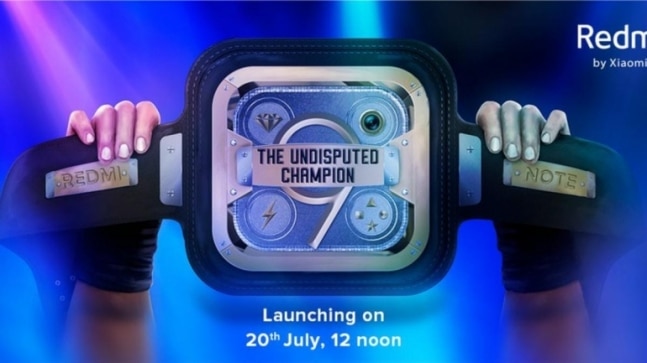 Redmi has confirmed that it will finally be launching a new device in India later today. The company had previously confirmed through a teaser that India is set to get its third Redmi Note 9 model on July 20. The company revealed this information by sharing a teaser on its Twitter profile, showing a championship belt with number 9 and the words Redmi and Note on it.

Upon its launch, the phone would most likely be presented to Indian buyers as a slightly toned-down version of the Redmi Note 9 Pro which was launched in India a few months ago. It is also expected to be slightly different from the global variant of the phone launched by the company before.

The moment we've all been waiting for!

The #UndisputedChampion, our next #MadeInIndia smartphone arrives on 20th July at 12 noon!

Packed with best in class specs and highest quality that's sure to make heads turn.

Redmi Note 9: Expected price and how to watch live stream

The Redmi Note 9 is expected to come to India with an aggressive price. The India variant of the phone could retail for less than $199 (approx Rs. 15,000) for the entry 3GB + 64GB storage variant, and $249 (approx Rs. 19,000) for the 4GB + 128GB storage model. However, for India, the company is also working on a 6GB variant. Pricing of this unit remain a mystery. The phone could be launched in Forest Green, Polar White, Midnight Grey colour options.

More on this would obviously be known when the phone launches today at 12pm IST. The live stream of the event is set to be hosted on YouTube and the Mi India social handles.

The Redmi Note 9 could bring a 6.53-inch IPS panel with FHD+ resolution and a punch-hole housing a 13-megapixel camera. Earlier, a report by MySmartPrice has revealed that the Redmi Note 9 will be launched in the country in the third week of July, with the 20th of the month being pegged as the most probable date of release for the phone.

Keeping the lights on is a 5020mAh battery that supports 18W fast charging. It also gets a 22.5W fast charger in the box for topping the battery quickly. Note 9 also gets a USB-C port, a 3.5mm headphone jack, NFC for select markets, and an IR blaster.