Apple's 'New iPad' is great, but the cheaper iPad 2 is better

At the end of the day it wasn't the iPad 3, just a 'New iPad'. There were other surprises too, other than the name. For instance, despite the much superior display and powerful processor the new iPad is expected to give the same battery life as before.

Most of the rumours that had been doing the rounds over the past few months - except for that of a smaller device and a missing home key - came true. For many, that was the sad part. With Apple, everyone is so used to surprises.

There were a couple of surprises though, other than the name. For instance, despite the much superior display and powerful processor the new iPad is expected to give the same battery life as before, about 10 hours on 3G - cut an hour if you are on 4G LTE. Then, all this comes for the same price as before, 16GB for $499.

As expected, the new iPad will also have 4G LTE capability, which will make it at least twice as faster than the 3G version. But, this is one feature that Indian geeks won't be drooling about, at least not yet.

In India, the new iPad is likely to start selling at iPad 2's current price, just under Rs 30,000. But the big news for a country as price conscious as ours has to be the fall in prices of the iPad 2. The chances are the older 16GB Wi-Fi version will now start selling at least Rs 5,000 less, making it much more affordable. This could prove very costly for Apple's rivals, at least those left standing. A revision of the .5-million shipment projections for 2012 could also be on the cards.

Another announcement on Wednesday also indicates that Apple has become soft on pricing. The new iPhoto app, which really puts the new retina display and the faster, more powerful A5X chip to the best use, will be available for just $4.99.

Anyway, the new iPad will wear its better display on its sleeve and that is why there is also a better rear camera and 1080p video recording to tout its best features. 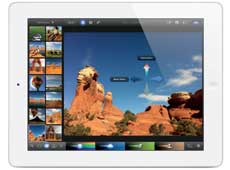 What does all this mean for the tablet market?
The 'New iPad', certainly the best tablet device in the market, is now available at the price for which you would have bought the iPad 2. And the iPad 2, which has overnight been relegated to the second best tablet around, has now become much more affordable. Wait for a few weeks to see how this impacts the other tablet makers. Price cuts must definitely be on the cards.

And it won't be just the rival tablet makers who are out reworking their balance sheets. As Apple CEO Tim Cook said at the launch on Wednesday, "iPad is the poster child of the post-PC world."

In fact, with 15.4 million units, Apple claims it sold more iPads in Q4 2011 than all the PC sales put together. That is certainly a figure hard to ignore.

The first iPad was introduced on March 12, 2010. The sleeker, faster iPad 2 was announced on March 2, 2011. Apple has so far sold around 15 million iPads, about 90 per cent of the entire tablet market.

India is not in the first wave of countries where the new iPad will start selling on March 16. But if the iPad 2 story is any indicator, the new device could hit Indian stores in a couple of months.

Apple is estimated to have a 43 per cent market share in tablet sales in India in 2011, according to research firm IDC.

What is new in the new iPad?