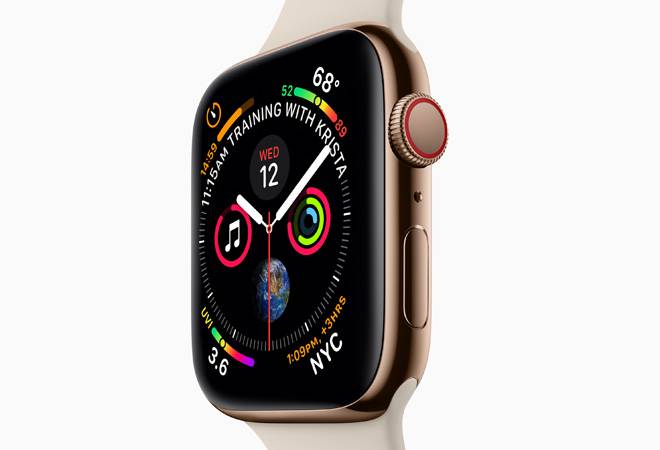 Apple took its own sweet time to come up with its first smartwatch in 2015. And since then, there has been no looking back. In such a short span of time, Apple has improvised its watch many folds. From just tracking step count, measuring heart rate and notifying about the incoming calls and emails, Apple Watch has emerged as a holistic smartwatch. The company has focused on all the key areas - Apple Watch motivates you to be active and focuses on small nuances of your health while keeping you connected. But before we jump on to the functionality, let's talk about the design first.

Design: Instead of a circular dial, the Apple Watch has a square dial as this year's watch has been redesigned inside out. It is sleek and features a 30 per cent larger display with curved corners. The 38mm watch has been replaced with a slightly bigger 40mm and the 42mm with 44mm.  With the previous generation Apple Watch, I always found 38mm to be a little small and 42mm to be slightly big for my wrist. The new 40mm fits perfectly. And the existing watch band fits perfectly in the new one. Apple claims to have re-engineered the Digital Crown as well that gives a mechanical feel when scrolling. Overall, it feels tad thinner at 10.7mm and the 40mm watch case weighs 30.1 grams.

Display: For Series 4, Apple has opted for a new display technology called LTPO, which basically is a high-quality OLED that increases power efficiency. Everything looks bright and vibrant on this new display, even under harsh sunlight. Even the slight increase in the size of numbers and alphabets makes a huge difference on such a small screen. One thing Apple Watch still lacks is the 'Always On' display. Available on recently launched Samsung Galaxy Watch, the 'Always on' display setting kept the screen active when worn on the wrist, making it look more like a regular watch. This feature will definitely affect the battery life, and inclusion of this feature could me a day's battery life instead of two.

Watch Faces: One thing I love about smartwatches is the ability to change the watch face to go with every occasion. And there are quite a few for Apple Watch too. Complementing the bigger screen, Apple has come up with new watch faces. The one you see in the image above is 'Infograph' that has been designed to utilise the bigger screen for displaying a lot more information. There are complications on all the four corners -- top left, top right, bottom left and bottom right, along with the four sub-dials. I was able to customise the information each one of them displayed. For instance, I had selected the top left to UV Index, top right to weather, bottom left to Walkie Talkie and bottom right to activity. There was an option to turn-off the sub-dial or even add favourite contacts to the same. A simple tap on the favourite contact allowed me to dial a call or send a message using the preset messages, scribble, emoji or more. There is also an 'Infograph Modular' watch face as well with a different layout. Fire, water and vapor watch faces are some of the interesting ones, which aren't computer generated but actually filmed at 200 frames per second.

Although, Apple allows you to customise watch faces by choosing colour, style and more, one thing you cannot access is third-party watch faces. Apple has still not opened the watch face ecosystem and doesn't allow you to download the fancy watch faces available from various developers. If Apple does, it will bring a lot of options and customisations to choose from, making it more personalised. I would love to add the watch face from Ulysse-Nardin to the Apple Watch.

Fitness tracking: Apple Watch is a perfect workout companion as it can track many outdoor and indoor activities. This includes an indoor walk, outdoor walk, elliptical, rower, stair-stepper, high-intensity interval training, hiking, yoga, outdoor swim and more. With the previous generation of watches, I often used to forget to start workout tracking. But this latest watch can auto-detect workout sessions and reminded me during the session. The new feature - start workout reminder and end workout reminder - came in handy as the watch automatically detected the workout and reminded me to start one. It even gave the credit for the exercise done. The circular activity rings are informative and give a quick glance at the number of calories burnt, minutes of exercise and standing time. Swiping down a little reveals the number of steps walked. But most importantly, the watch motivated me to walk for the few more minutes to close the activity rings for the day. After long sitting sessions, Apple Watch reminded me that it's time to stand. The sensors onboard are pretty accurate in measuring activity as well as heart rate.

Unfortunately, sleep tracking is still not available on Apple Watch. Considering the company's focus towards health and fitness, this is one feature that Apple Watch should consider incorporating.

Fall detection: One of the biggest highlights of Series 4 is the ability to accurately detect a fall. Although I was not able to test it (thankfully I didn't slip or encountered any fall), this feature detects a hard fall and after a short period of inactivity informs emergency services and emergency contacts. This can be really helpful in case of an accidental fall when you are not in the position to get up or contact family and friends. The feature has been turned off by default unless you are 65 years or above. I activated this feature from the Watch app on the iPhone.

ECG: Series 4 can be your heart's best friend. Although the ECG app is not available as of now but when available, the watch will be able to generate an ECG, similar to a single-lead electrocardiogram, in just 30 seconds. Launching the app and touching the Digital Crown would generate an ECG waveform and save it in form of PDF for you to share it with your doctor. Electrodes have been built into the Digital Crown and an ultrathin chromium silicon carbon nitride layer applied to the sapphire crystal to read electrical heart impulses. According to the company, such a feature requires regulatory approvals and Apple is working on obtaining one in India as well.

Connectivity: The watch is LTE enabled and can be set up using the mobile data option within the Watch app. While I struggled pairing it with the Airtel connection, the set up happened instantly with Reliance Jio. Once done, when the phone was not around, the watch continued to receive notifications for emails, messages, WhatsApp and I was able to use it for answering and making calls too. When not connected to the phone, the watch first looks for the WiFi connectivity, before switching to mobile data connectivity.

Other features and performance: Apple watch is pretty simple to operate. Raising the wrist to view time wakes the watch screen. When I was able to turn off the display just by putting my plam over the watch. Apple has integrated Siri in the watch, that can be used for answering queries. A simple action of raising the watch and bringing it close to the face should activate Siri but it didn't always work for me. I preferred long pressing the Digital Crown to talk to Siri. Using the Watch app, I was able to turn on/off the background app refresh for various apps, which further helped in saving battery. There is this new fun Walkie Talkie that I was able to use to send voice message in real time to another a lot of friends using Apple Watch user on watchOS 5. But I also ended up feeling embarrassed at a meeting when the watch started reading out a funny voice message sent by a friend out aloud as and when received. Hence, I preferred keeping this feature turned off and turn it on only when I need. There is also a Breathe app that always help me with quick deep breathing sessions. There is even a dedicated Breathe watch face.

Battery: The battery backup of the Apple Watch has improved significantly. Accompanied with a wireless charging dock, the watch took over a couple of hours for a full charge that lasted me close to two days. on a single charge.

Verdict: Apple Watch Series 4 with LTE is the best smartwatch you can buy but it is restricted to only iPhone users. The LTE variant of the watch is priced starting Rs 49,900. But if you are not very keen on the LTE functionality, consider the GPS variant that starts at Rs 40,900.