LG goes all out with Google Nexus 4

With the HTC One and Samsung S4 already here, it might be a bit too late to review the Nexus 4. But we decided to review this phone, launched globally in 2012, for three reasons. Firstly, it's for the first time that a Google smartphone has officially become available in India. Secondly, its launch price is very competitive. And, lastly, we needed to test the plain vanilla Android operating system.

Design: The Nexus 4 might is not a great looker compared to the new HTC One or even the Samsung Galaxy S4 . Its all-black body has a 4.7-inch Corning Gorilla Glass 2 display that is a framed by a sleek bezel. The 'Nexus' branding dominates the back, while there is just a small LG logo at the bottom. Thanks to the non-removable back panel, a SIM card slot has been placed on the left panel below the volume keys. The power key on the right has been placed strategically, making it comfortable to use. At 139 grams, it feels slightly heavy to hold. 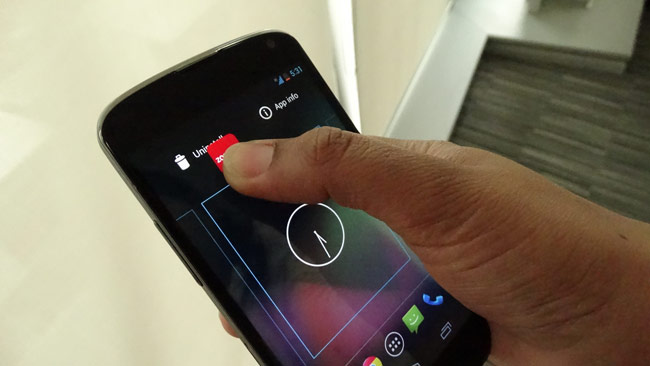 The 4.7-inch Nexus 4 has the latest Android 4.2 operating system, but devoid of any custom interface
There were complaints of display issues on the Nexus 4. But we didn't encounter any of them, maybe because this has the updated design Google launched a couple of months ago.

User Interface: The Nexus 4 has the latest Android 4.2 operating system, but devoid of any custom interface. This version of the OS offers widget support to the lock screen. By swiping the locked screen towards the left we could launch the camera and add up to four additional widgets such as emails, messages and calendar. A circular app icon with two app shortcuts on each side dominates the bottom of the display. But even below this row are the three touch keys - back, home and multi-tasking - that have been moved up to the display. 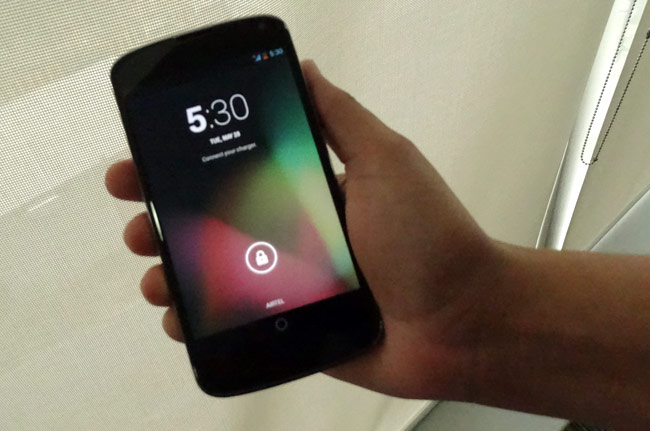 Nexus 4 is powered by a Qualcomm Snapdragon 1.5GHz quad-core processor paired with 2GB RAM
The homescreen consists of five panels, none of which can be removed, nor can new ones be added. But we can add shortcuts and widgets to these panels. While the widgets were resizable, we were able to drag one app over another to create a folder. The notification bar that can be dragged from the top doesn't feel crowded as it shows time on the top left with an icon on the right that displays the shortcuts for basic settings such as brightness, Bluetooth, Wi-Fi, etc. In the main app tray, 20 small icons are placed on a single page. By swiping towards the right more apps and widgets can be accessed. Apps installed from the Play Store can be uninstalled by simply dragging the app upwards from the main launcher tray. The Nexus 4 has got an 8MP camera that captures images at 3264 x 2448 pixels.
Performance: This beast is powered by a Qualcomm Snapdragon 1.5GHz quad-core processor paired with 2GB RAM. From fetching emails to browsing the web to playing movies, the experience was impressive. We also managed to play heavy graphic games like Temple Run and ShadowGun without any lag. The graphics appeared neat on the display and the sound was also impressive. We were pretty happy with the performance as there wasn't any lag and it didn't even hang for once. However, it wasn't the top scorer in some of the benchmark tests we ran on this smartphone.

Camera: The Nexus 4 has got an 8MP camera that captures images at 3264 x 2448 pixels. The new camera interface is simple and easy to use. Settings like HDR, flash, focus and scene pop-up on a circle. The Panorama mode was easy to use and the results were pretty good. Photo Sphere, an extension to Panorama mode, can capture photos in multiple directions and stitch them up. The images captured using the Nexus 4 were decent but not as good as the HTC One, Samsung Galaxy S4, Apple iPhone 5 or even the Sony Xperia Z. The device also captures decent videos at 1080p resolution.

Battery: The Nexus 4 has got a 2100 mAh battery that gave us a day on average use. This usage included two push email accounts, Facebook, Twitter, calling, web browsing, Whatsapp and a little bit of imaging.

Xbox One leaves many questions unanswered