With a premium look and feel, Samsung's Galaxy A6+ is a feature-loaded device. But is it good enough to compete with the offerings from the likes of Vivo, Xiaomi, Honor etc.? 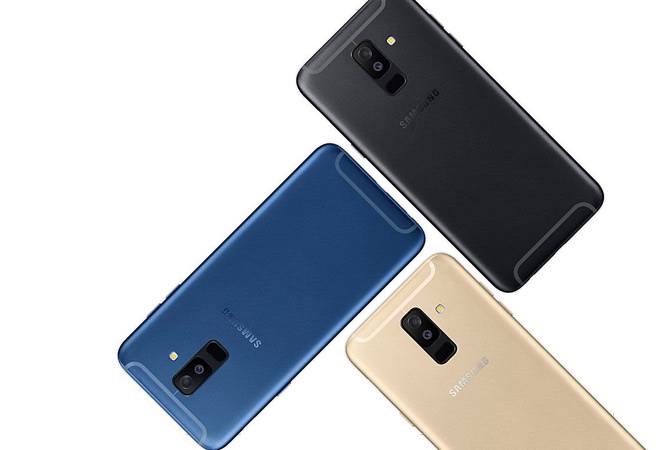 With a premium look and feel, Samsung's Galaxy A6+ is a feature-loaded device. But is it good enough to compete with the offerings from the likes of Vivo, Xiaomi, Honor etc.?

Design: Bezel-less displays and integration of notch, have helped smartphone manufacturers incorporate a bigger display in a compact form factor. But Samsung's A6+ doesn't belong to this breed. It houses a 6-inch infinity display in a metallic frame with curved edges, which is 160.2mm tall, 75.7 wide and 7.9mm thick. Weighing 191 grams, the A6+ is heavy to hold but at the same time feels sturdy. The power button along with a small speaker grill is on the right panel, volume buttons along with two SIM trays (one for SIM 1 and a secondary tray housing SIM 2 and memory card) on the left panel, and a microUSB port along with audio port at the bottom. There are distinct antenna lines towards the top and the bottom of the rear, and a vertical dual camera module along with the fingerprint scanner towards the top centre, that makes the A6+ look stylish.

Infinity display: Leaving ample space for the sensors, microphone and camera on the top, the 6-inch edge-to-edge Infinity display is a delight to look at. This full HD+ Super AMOLED display looks punchy with great colour reproduction and has deep dark blacks. Of the various screen modes including adaptive display, AMOLED cinema, AMOLED photo and basic, I preferred the first as it automatically optimised the colour range, saturation and sharpness of the display. There is also a blue light filter that limits the amount of blue light for reducing eye strain. The option to block accidental touches when the phone is in pocket or bag came handy. Although the navigation buttons are a part of the display, Samsung has still left a wide bezel at the bottom.

Camera: Without cutting corners, Samsung is offering a dual camera setup for depth images and its proprietary Bixby Vision feature on the A6+. The former is labelled as the Live Focus mode, which allows adjusting the background blur while capturing an image and even post-capture. When the subject is in focus, the Live Focus icon illuminates in yellow. The 16-megapixel and 5-megapixel camera setup were quick to focus and capture images. I was even able to capture bokeh selfies using the single 24-megapixel camera at the front. Both the cameras did a pretty decent job in blurring the background; however, the ones captured from the rear camera were sharp with better colour reproduction. While the images captured in well-lit surroundings were impressive, low light photography isn't A6+s' forte. Bixby Vision is another noteworthy feature with dedicated modes for text, image, location, food, wine and QR Code. However, it uses third-party software for fetching information. For location, it fetches information from Foursquare, images from Pinterest, Text by Google and Food is analyzed by Azumio, Pinterest, YouTube and Samsung Health. Just by pointing the camera at the glass, the Bixby Vision Image mode detected the object and showed some related results. The text mode helped in translating the text. But for all this to work, the phone had to be connected to the internet. There is also a Sticker mode which is accessible in both the rear camera and selfies, and it accurately imposes the stickers on the face. A friend, who is active on Snapchat, simply loved this feature.

Performance: The Samsung Experience 9.0 based on Android Oreo had a very clean user interface. Swiping towards right from the home page launched Bixby assistant (no dedicated button for Bixby) and swiping up from bottom displayed the app tray. Along with the default apps and Google apps, there are some additional apps too -- Samsung Notes for taking notes, Samsung Max for saving mobile data and privacy protection, My Galaxy for entertainment and services, Samsung Mall for shopping, Samsung Pay mini for UPI payments along with Samsung Health, Galaxy Apps, Voice recorder, and more. Even the A6+ has Knox security support and secure folder for storing sensitive data securely. The latter is a kind of secure vault accessible by logging with the Samsung account (can create one for free). I was able to add photos, notes and even create copies of the apps to the secure folder, which was password protected. For device security, there is a fingerprint scanner at the rear, which is quick to unlock the device and an additional Face Unlock feature too. When used for day to day tasks such as browsing the web, streaming videos, social networking and basic gaming, the smartphone performed decently. But it isn't designed for heavy graphics games. The device is powered by 1.8GHz octa-core processor paired with 4GB of RAM. My review unit had 64GB of onboard storage, of which over 50 GB was user accessible. When running short of space, the memory card slot with support for up to 256GB of storage can come in handy.

Battery: Other than heavy graphics games, another thing where Samsung misses the mark is the elimination of fast charging, a norm which is increasingly becoming a standard in smartphones. The 3500mAh battery onboard just managed to last me a day with heavy use.

Verdict: When compared on paper, the Galaxy A6+ for Rs 22,999 does not come across as the most powerful smartphone in its price category. However, the premium design, stunning display along with Samsung's security feature and Bixby Vision makes it a compelling proposition.

Honor 10 review: Bang for the buck

Smartphone apps don't listen to your conversations, but they do something equally creepy