Samsung Galaxy A32 comes with a 6.5-inch and also features quad cameras at the back. 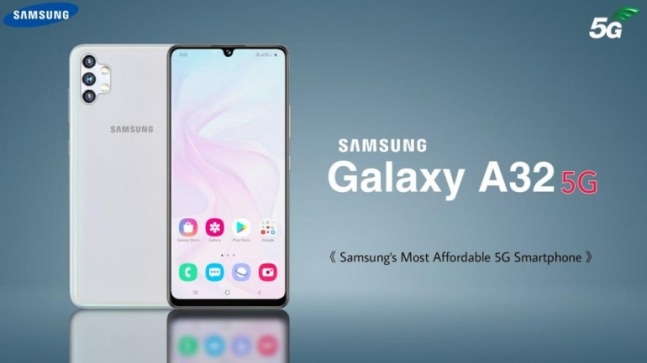 Samsung has launched a new smartphone, the Galaxy A32 5G in Europe. The phone has been announced as the company's cheapest 5G smartphone to date. The device comes with thick bezels at the bottom and the top of the display. The Galaxy A32 5G also comes with a notched display that houses the lens for the selfie camera. The bezels and the notched display make the device look very basic in the renders that Samsung has shared.

The device also comes with a quad rear camera setup at the back of the phone. The device has been announced by Samsung to be available in two RAM and storage configurations, and four colour options -- namely Awesome Black, Awesome Blue, Awesome Violet, and Awesome White. Samsung has priced the device at EUR 279 approx Rs 25,000 for the 64GB variant with the more 128GB variant available for EUR 299 (approx Rs. 27,000).

Samsung Galaxy A32 comes with a 6.5-inch HD+ Infinity-V TFT LCD display, Samsung has revealed that the Galaxy A32 will be powered by an octa-core processor, but it has not said anything about the chipset running at its core. However, rumours suggest the chipset on board could be a MediaTek Dimensity 720 SoC which will be paired with either 4/6/8GB RAM (depending on the region) and up to 128GB internal storage expandable via a microSD card slot. For optics, the Galaxy A32 comes with quad cameras at the back with a 48-megapixel primary sensor sat next to an 8MP (f/2.2 aperture) ultra-wide sensor and a 2-megapixel (f/2.2 aperture) depth sensor. To complete the set-up there's a 5-megapixel (f/2.4 aperture) macro lens.

For selfies, the device gets a 13-megapixel lens. Apart from this, connectivity features on the device include 5G, 4G LTE, dual-band Wi-Fi. The Galaxy A32 also comes with support for surround sound with Dolby Atmos technology. The Samsung Galaxy A32 has been announced to come with a 5,000mAh pack with 15W fast-charging support and a side-mounted fingerprint sensor for security.

Flipkart Big Saving Days Sale to go live on January 20, here are some of the deals

Asus teases ROG Phone 5 that has almost no bezels