As per the leaked information, the M01 will come with a 5.71-inch display with HD+ resolution. 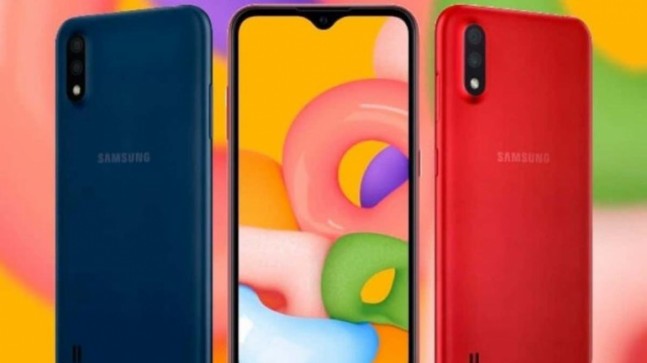 Samsung is widely tipped to launch two new devices in India next month, with one of them being the Galaxy M01. The phone is expected to be made available to buyers starting first week of June, and ahead of its launch, a schematic containing the Samsung Galaxy M01's specs and dimensions has leaked online.

Leaked by AndroidPure, the schematic shows of important specs and design of the device, looks like it has been taken out of a quick start guide for the phone. It lists a few of the device's specifications and the phone's dimensions.

The phone will be powered by the Snapdragon 439 paired with 3GB of RAM and 32GB of on-board storage. For batteries, it will rely on a 4,000 mAh pack to keep the device running. The cameras on board could include dual-main lenses consisting of a 13MP main camera with f/2.2 aperture and a 2MP depth sensor with f/2.4 aperture. The front-facing camera is a 5MP shooter with f/2.2 aperture.

The Samsung Galaxy M11 is expected to be the more expensive of the two phones, and even feature specs to match. The Samsung Galaxy M11 is said to get a 6.4-inch HD+ (720x1,560 pixels) display with a hole-punch. At the heart of the device is expected to be an octa-core SoC, paired with 3GB of RAM and 32GB of onboard storage which is said to be expandable via a microSD card (up to 512GB).

The cameras on board will be a triple rear camera setup with a 13-megapixel primary sensor, a 2-megapixel depth sensor, and a 5-megapixel wide-angle camera. For selfies, the phone has an 8-megapixel camera. In terms of connectivity, the phone gets 4G, Wi-Fi 802.11 b/g/n, Bluetooth v4.2, GPS, Glonass, and a USB Type-C port. There is a 5,000mAh battery inside the Galaxy M11 with support for 15W fast charging.