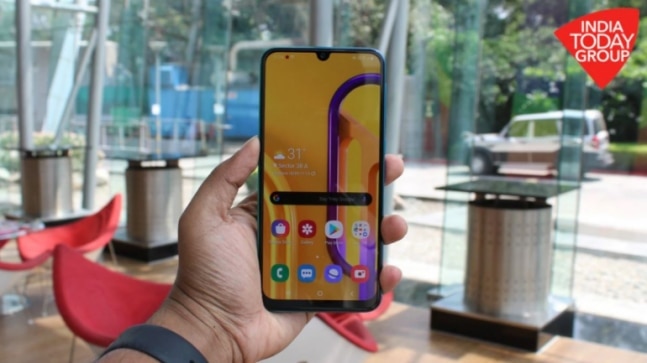 Samsung has announced the launch of a new variant of its popular, Galaxy M30s smartphone. The variant brings 4GB of RAM and 128GB of storage and will available across retail stores, Amazon.in and Samsung's online stores.

The Samsung Galaxy M30s comes with a massive 6000mAh battery paired with support for 15W fast charging over Type C platform. The new variant has been announced to be made available in dual-tone colours -- Opal Black, Sapphire Blue and Quartz Green. Galaxy M30s 4/128 GB has been priced at Rs 14,999 and will be available across retail stores, Amazon.in and Samsung online store from March 14, 2020.

The company has also announced an introductory offer for the variant which will allow them to avail a 5 per cent cashback with HDB financial services.

On the outside, the M30s sports a 6.4-inch FHD+ Infinity-U Super AMOLED display, much like its predecessor. It also comes with Widevine L1 certification for HD streaming on platforms like Netflix and Prime Video.

The M30s gets a glossy plastic unibody cover on the back that comes in some new gradient colour options. The triple camera setup on the back has been upgraded to now feature a 48MP primary sensor for high-resolution and detailed photography.

The camera system also includes an 8MP ultra wide-angle sensor and a 5MP depth sensor with support for Live Focus. On the front, the M30s gets a 16MP selfie camera. The M30s camera also supports Night Mode, AI scene detection and super slow-mo recording, among other things.

The USP of the M30s is its massive 6,000mAh battery which helps Samsung promises a two-day battery life with the Galaxy M30s. The phone is also powered by a new 2.3GHz Exynos 9611 chipset based on a 10nm process and equipped with Mali G72 MP3 GPU.

Samsung Galaxy M30s ships with One UI based on Android 9 Pie. It supports storage expandability via microSD card (up to 512GB). Samsung also says the phone has a 0.468 W/Kg Head SAR value, which makes it safe to use. The handset supports 15W fast charging over Type-C port. The M30s measures 8.9mm in thickness and weighs under 190 grams, despite offering a large 6,000mAh battery.

4G data charges may go up by 10X as Airtel, Jio and Vodafone ask govt to set minimum floor price