The Galaxy Note 10 Lite has been launched in India as a direct competitor to the OnePlus 7T. The phone starts at Rs 38,999 making it the most affordable Galaxy Note smartphone in India. 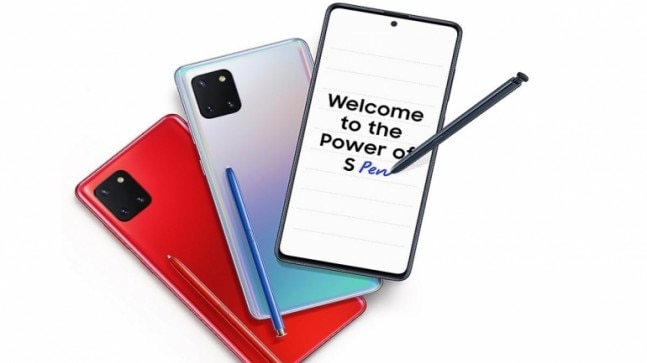 Samsung has finally launched its latest smartphone, the Galaxy Note 10 Lite in India. The smartphone comes to the country after having been showcased in Las Vegas at the Consumer Electronics Show (CES) 2020.

At the event, Samsung only took the lid of the key details about the smartphone but refrained from revealing any pricing details for the device. However, by launching the smartphone in India, it has also revealed the pricing of the device which makes it a direct competitor to the OnePlus 7T.

The Galaxy Note 10 Lite is now the most affordable S-Pen totting smartphone from Samsung and is considerably more affordable than the Note 10. The phone has been launched in two variants in the country, with the entry variant sporting 6GB of RAM and 128GB of storage, while the higher end one sporting 8GB RAM.

Galaxy Note10 Lite will be available in Aura Glow, Aura Black and Aura Red colours. The phone's pricing starts at Rs 38,999 for the 6GB variant and goes up to Rs 40,999 for the higher end one. However, the company has announced that this can be brought down some more with the help Upgrade Offer of up to Rs 5,000.

Despite being a watered-down variant of the flagship Galaxy Note 10, the Galaxy Note 10 Lite brings with it some impressive, flagship-like specs. It brings with itself edge-to-edge 6.7-inch Infinity-O displays capable of Full HD+ resolutions and a pixel density of 394 ppi.

Under the hood, the Galaxy Note 10 Lite offers Samsung's in-house Exynos 9810 chipset which has been paired with 6/8GB+128GB RAM and storage configuration. The phone is kept on by a massive 4500mAh battery that supports super-fast charging.

The S-Pen also appears to be the biggest USP of the device, with the company already releasing a number of teasers that talk about the most iconic Galaxy experience now being made more accessible to a larger audience.

You can now withdraw cash from ICICI Bank ATM without using your debit card: Here's how you can do it