While the new CAD-based renders do bring some surprises, they do overall appear to show a design that borrows heavily from the Galaxy S20 series. 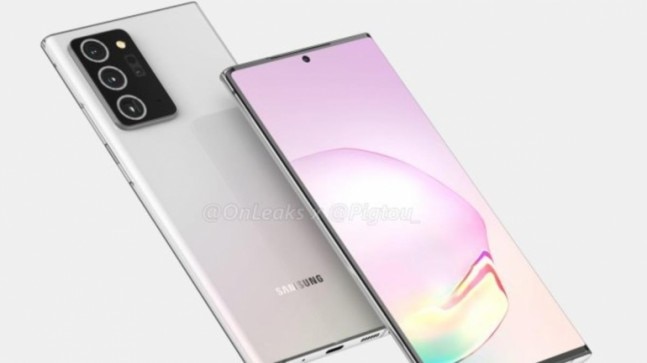 It's the start of a new day, and we have with us a new set of leaked CAD-based renders that claim to reveal the design of the upcoming Galaxy Note 20+ smartphone. Courtesy of OnLeaks and Pigtou, the new renders are of the Samsung Galaxy Note 20+ which show off the upcoming phone's design, camera array, and also its large display.

While the new CAD-based renders do bring some surprises, they do overall appear to show a design that borrows heavily from the Galaxy S20 series. On the front, the Galaxy Note 20+ is shown to bring slight curves and a boxy design -- something we've previously seen on Galaxy S20 Ultra and even the Galaxy Note 10 last year. Interestingly, the renders also claim the same placement for the S-Pen on the device. This is quite surprising as previous leaks have suggested the smaller Galaxy Note 20 could switch the location of the S-Pen on the phone. The new leak about the phone also reveals that the Galaxy Note 20+ will have dimensions at 165mm long, 77.2mm wide and 7.6mm thick.

The only noticeable change that catches the eye is camera bump at the back of the Galaxy Note 20+. The device appears to house a rather big camera module that reminds us of the S20 Ultra's module. However, there are some changes. Like the fact that the render shows off a set-up with only three camera sensors, with no space for a ToF lens.

OnLeaks also claims the Galaxy Note 20+ will bring a rather big display at 6.9-inches. This will be bigger than the one found on the Galaxy Note 10+ which came with a 6.8-inch display. However, this may not have been made possible by increasing the size of the phone, but rather narrowing the bezels surrounding it.

Reports in the past have suggested that the Galaxy Note 20+ could come with a 120Hz mode for faster refresh rates. Additionally, reports claim the panel on the phone will be built using LTPO tech. This should offer the device improved power consumption compared to LTPS panels. This technology was first seen on the Apple Watch Series 4, but Samsung debuted its own LTPO displays with the Galaxy Watch Active2.

Earlier, we have also read reports that the Galaxy Note 20 will come with a powerful new processor that will be faster and more power-efficient than anything Samsung phones have seen in the past. A report by ZDNet Korea has all but confirmed that instead of equipping the Galaxy Note 20 devices with the Snapdragon 865, 865 Plus, or its in-house Exynos 990 chipsets Samsung is working on an upgraded Exynos 992 chipset for its next phone.

BSNL announces Rs 699 and Rs 786 prepaid plans: Here is everything you need to know

Reliance's JioMart goes live in India: Will it survive in Amazon-Flipkart dominated market?