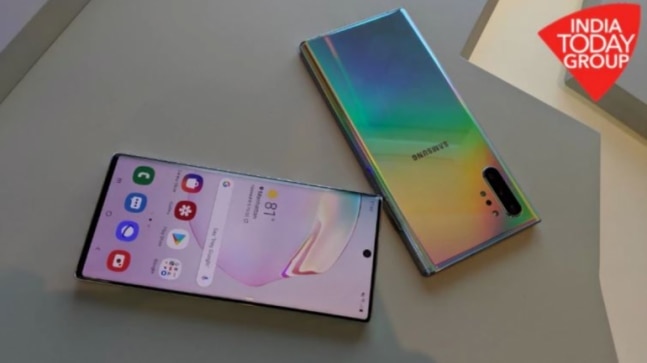 Despite Samsung only launching its Galaxy S20 series smartphones earlier last week, reports suggest the company has already started working on its next flagship, the Galaxy Note 20. The company has recently filed a new patent for a device with ultra-curved edges.

The patent filed at the US Patent and Trademark Office suggests that Samsung could be planning to use a waterfall screen, similar to the one showcased by OPPO last year, on one of its phones.

And with the Galaxy Fold 2 highly unlikely to be the device, it would be safe to assume that this one could be the Galaxy Note 20. The patent suggests that the device will have buttons protruding through glass edge that will be seen on the device. But that's not it, the patent also talks about the presence of a hologram device, grip sensor, and a projector.

If the device does indeed end up getting a curved waterfall screen, it will join Oppo which is also working on a phone with such a screen. For the uninitiated, the company had emerged as the first phone maker to showcase such a display when it showcased the technology late last year.

The patent also shows the upcoming phone to don three front-facing cameras and a 3.5mm headphone jack. Another interesting thing the patent talks about is a built-in projector and hologram device for the Galaxy Note 20.

This won't be the first time we're hearing of a portable projector on a smartphone. And to be honest it would make complete sense for a Galaxy Note phone that is talked up by the company as a solution for professionals and artists. With a built-in projector, a presentation or showing of art by the user would become an easy task.

Having said that, it needs to be remembered that this is at the end of the day a patent listing for now, and all things found on patent listings don't always end up making way to consumer-grade smartphones. As such, it'll prudent to not get too excited over the claims made in the patent and instead wait to find out the features that actually end up finding space on the next Galaxy Note device.