Samsung has launched a host of new products at its Unpacked 2020 launch event. Here's everything you need to know about them. 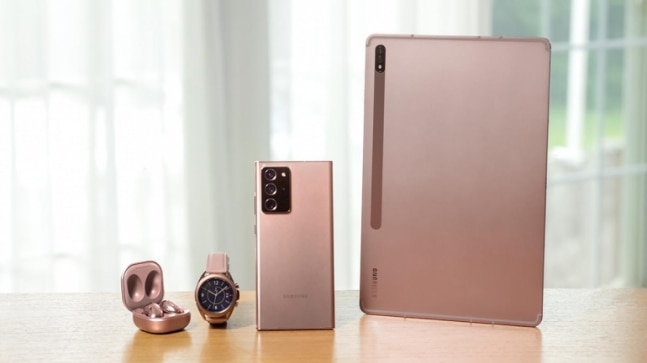 Samsung's second major launch event for the year, the Galaxy Unpacked 2020, is finally over. The event saw a number of big-ticket announcements being made, with the company officially unveiling the Galaxy Note 20 phones, alongside a host of other products such as the Galaxy Z Fold 2 and the Galaxy Watch 3.

These new products will now act as the mainstays of the company's smartphone and accessories business, which over the last year or so has been facing increased pressure from competitors who have been challenging Samsung at its game in the premium-end of the market.

The online-only launch event was very much along the lines of what had been expected, as Samsung announced pretty much all that it had been tipped to over the past few weeks.

The Galaxy Z Fold 2 builds on the DNA of the original Galaxy Fold, however, there are a few differences here that set it apart from its predecessor. The inner screen now has a punch-hole selfie camera. The outer display is also bigger, and now covers almost the entire area of the front of the phone, instead of just a part of it as we saw on last year's Galaxy Fold. The front display has also been equipped with a selfie camera housed within a punch hole

The design of the rear camera module has also been changed quite a bit, as it appears to look very much like the one on the Galaxy Note 20. The phone also shares the Mystic Bronze color with Note 20.

As far as the phone goes, the outer display will be 6.2-inches, with the one inside coming in at 7.6-inches. Both are Super AMOLED panels which support a fast refresh rate of 120Hz. Galaxy Tab S7 and S7+ have been launched as the company's latest tablets that promise to combine the "power of a PC, the flexibility of a tablet, and the connectivity of a smartphone."

Of the two, the former comes with an 11-inch LCD display running at a resolution of 2560x1600, while the latter gets a 12.4-inch AMOLED screen with a higher resolution display running at 2800 x 1752 pixels. Samsung has also announced that both tablets will support 120Hz refresh rates, and bring the same slim bezels design. The tablet is powered by the Snapdragon 865+ chipset which has been paired with either 6GB/8GB of RAM, and 128 or 256GB of storage.

The Tab S7 and S7+ ship with the S Pen. However, the book cover Keyboard accessory still remains an optional one. There's also support for DeX mode on the two tablets. The tablets will be available later this year, with the Tab S7 starting retail at $650 and the Tab S7+ going on sale for $850.

Samsung has also launched the Galaxy Watch 3. The company claims the watch has been built with "premium materials" and features a slimmed-down version of the popular rotating bezel.
The Galaxy Watch 3 comes in a stainless steel or titanium case. The watch brings to access to over 40 different workout modes, seven exercises that can be automatically detected, an improved running mode, trip detection, and more.

The Galaxy Watch 3 will be available for purchase starting August 6. The Galaxy Watch 3 has been announced in 41mm and 45mm variants. The watch starts at $400 for the Bluetooth model, with the LTE models starting retail at $450 and $480. The company has also launched the much-awaited Galaxy Buds Live. The TWS earbuds feature a new shape which the company claims are extremely ergonomic and provides a comfortable fit. These Buds use AKG-tuned 12mm drivers which, along with a bass duct improves sound quality.

Galaxy Buds Live come with three microphones and Voice Pickup Unit. These earbuds feature Active Noise Cancellation for open type bringing the best of both: live and spacious sound quality, with the ability for you to tune in (or out) of the world around you.