The new audio player launched in the Carvaan series comes with a screen that displays lyrics for classic songs when the karaoke feature is used. 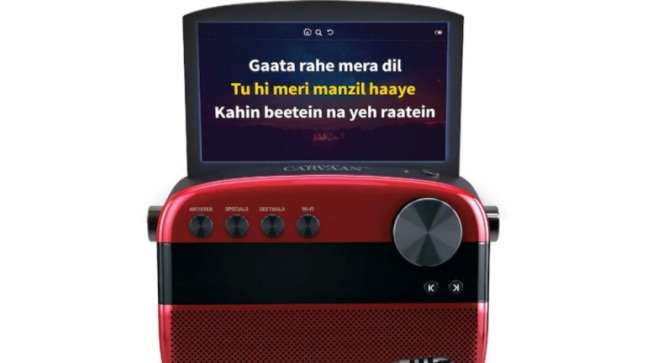 Saregama Carvaan Karaoke with a screen that displays lyrics has been launched in India. The new audio player launched in the Carvaan series comes with a screen that displays lyrics for classic songs when the karaoke feature is used. The Saregama Carvaan Bluetooth speakers come with thousands of pre-loaded Hindi classic songs. It has now been launched with various language options.

The Saregama Carvaan Karaoke audio player looks identical to the original Carvaan speaker. It flaunts the same vintage design with various buttons to choose switch music and a giant volume button. However, this Karaoke Carvaan comes with an in-built display that emerges from the rear panel of the Bluetooth speaker. Along with the audio player, buyers will also get a mike which can be used during Karaoke sessions. So let us have a look at some of the features and specifications of the Saregama Carvaan.

Saregama Carvaan has been launched in India at a price of Rs 19,990. The audio player can be purchased from the official website of Saregama. The device will also be available for purchase on Amazon and Flipkart soon. It has been launched in a metallic red colour option.

Not just the design, the new Carvaan Karaoke has borrowed some of the features from older siblings. Like the original Carvaan speaker, this one too comes with over 5000 pre-loaded Hindi classics. However, what sets the Carvaan Karaoke from other speakers is that it comes pre-loaded with 1000 karaoke tracks. There are various modes to choose from including the FM/AM radio, Aux, USB, and Bluetooth. This means that you can not only enjoy a few karaoke sessions, you can also listen to the FM, or connect the speaker to your phone to listen to songs of your choice.

The Carvaan Karaoke speaker houses two 5W speakers. For connectivity, it comes with wifi, Bluetooth, FM-AM, HDMI and 3.5mm port. The in-built screen that the Carvaan features has a resolution of 800x480 pixels. The audio player houses a 4,000mAh battery. The company claims that the speaker delivers up to six hours of audio playback on a single charge.

Inside the box, Carvaan Karaoke is also bundled with two mics that can be used during karaoke sessions. The tracks, volumes, and other things can be controlled from the mic. The mics come with features that filter out the extra voice and echo.