The soundbar is already available across 15 stores in the country and users who want to experience the device can head to any of the Sennheiser stores. 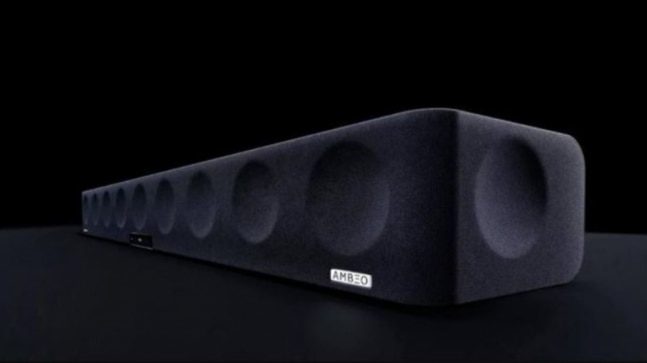 Audio giant, Sennheiser has unveiled its highly anticipated product, Ambeo Soundbar in India. The product was launched in India a year after it was launched in the global market. The audio device was also showcased at Consumer Electronics Show 2019. The soundbar is already available across 15 stores in the country and users who want to experience the device can head to any of the Sennheiser stores.

The device is priced at a whopping Rs 1, 99, 990 and it promises an impressive 5.1.4 surround-sound experience along with deep bass. Apart from that, the audio device comes with built-in Google Chromecast along with Bluetooth 5.0 for connectivity. The company website also reveals that the AMBEO soundbar delivers a 3D home audio experience.

The 3D sound is powered by 13-high end drivers that produce deep 30Hz bass without using an extra subwoofer. The device is compatible with Dolby Atmos, DTS:X and MPEG-H.

The audio bar can be controlled with the Smart Control App that allows the user to adjust the settings and tailor their sound according to their taste. The device is compatible with both the iOs and Android.

Talking about the big launch, Daniel Sennheiser, The C0-CEO of the company said that India is an extremely important market for them because of the music-loving buyers. He said, We are thrilled to be introducing the AMBEO Soundbar in India. India has been always been a music-loving country and an important market for us. Having seen a phenomenal response globally, we really look forward to seeing the way our audience takes to it here, he said in a statement.

Considering the price, the device is not even close to being called affordable or a mid-ranger hence it is certain that it wouldn't attract many takers in the country. Some of the best soundbars such as Bose and Yamaha have devices at much lower prices. If one really wants to spend around a lakh on a soundbar, one would definitely go for the Bose Soundbar 700 or the Yamaha YAS- 408 which costs Rs 79,000 and Rs 44, 490 respectively. These devices might lack some of the specs of the AMBEO soundbar but are certainly more affordable then Sennheiser.

Nokia 9.2 leak suggests major change in cameras; here's what HMD Global could be working on