Sniper India is a new game that lets you shoot enemies in Indian cities, now available on Android

When you see an enemy, you have to point the sniper gun and begin shooting in the brand new Sniper India game. 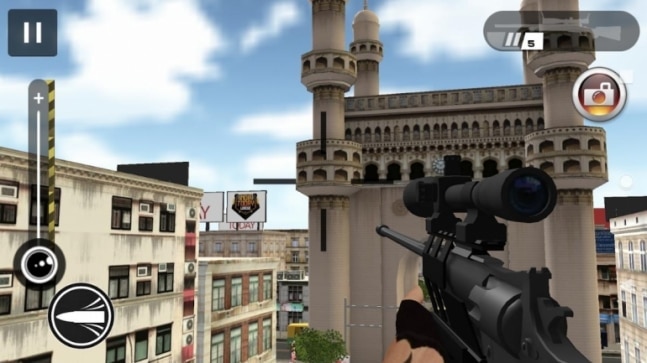 If you have been on a lookout for shooting games, Sniper India is a brand-new 3D game that you can consider. It is shooting game for smartphones, built keeping Indian locations in mind. When I say that, I mean the places, the monuments, buildings, and graphics have an Indian touch to them. It is a simple game where you have to snipe down enemies while saving soldiers and civilians.

The gameplay involves first-person shooting, much like what you get on PUBG Mobile, Call of Duty: Mobile, and other battle royale games. You get a range of sniper guns to choose from, along with accessories that help you score as many kills as possible. You run around places such as India Gate, Red Fort, Char Minar, in addition to searching for enemies in parks, on building tops, and streets in different Indian cities. You have to be alert while doing so because your enemies could be anywhere.

When you see an enemy, you have to point the sniper gun and begin shooting. You have the gun scope, as well, the zoom level of which you can change with the slider on the left. To shoot, there is a 'fire' button below it. And if you want to brag about your kill in front of your friends, there is a snapshot button on the top right corner of the game.

Achieving the target promotes you to the next level in the game, with each level having more difficult situations and tricky locations to shoot at enemies. Since you do not have to kill civilians or soldiers while hunting down your enemies, it becomes interesting to find the best location to be able to do that. These locations will be according to the city you have chosen before beginning to shoot. There are multiple cities that you can choose from. In case you need some additional accessory or more bullets, there are in-app purchases that you can make via Google Play Store. These items cost between Rs 300 and Rs 800 each.