In a video going viral, an Amazon executive has been seen delivering goods to buyersin Kashmir on horseback. 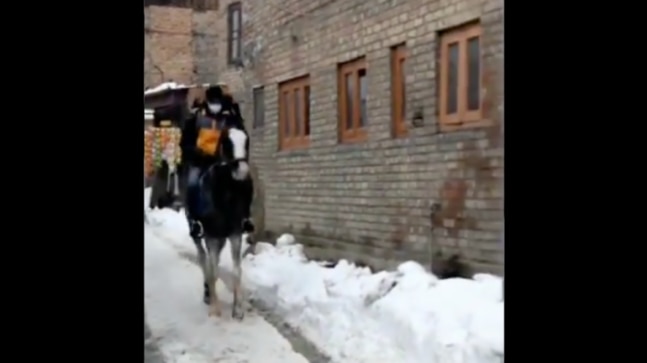 Amazon finds its way out to serve customers even in the most adverse conditions. First, the Coronavirus-induced restricted had crippled the services rendered by Amazon and now extreme weather conditions in Kashmir have put the e-commerce platform to test again. However, Amazon does not seem to let the circumstances affect its services. In a video going viral, an Amazon executive has been seen delivering goods to buyers in Kashmir on horseback.

The video shared by Twitter user Umar Ganie shows an Amazon delivery executive delivering goods to users on a horseback. You can see that the roads are covered in a thick blanket of snow. In situations like this, it is practically impossible to drive a two-wheeler so the delivery executive is using the traditional mode of transportation to get his job done.

Amazon has confirmed that the video is of a delivery executive from Kashmir.

As soon as the video was shared on Twitter, it became viral. Twitteratis hailed Amazon India for serving its customers in such difficult conditions. One of the Twitter users from Kashmir wrote, "In our social work profession, there is one principle called Use of Local Indigenous Resources."

"Amazon never fails to deliver its products on time. Salute to this genius delivery boy from Kashmir, despite heavy snow he delivers the product," another user tweeted.

Some users also tagged Amazon CEO Jeff Bezos under the video and wrote that he should feel proud of his team in India.

As far as the weather in Kashmir is concerned, just a day ago parts of Kashmir Valley have received fresh snowfall. Due to heavy snowfall in the valley, the authorities have halted vehicular traffic on various national highways adjoining Kashmir. Not just the traffic on road, several flights have been canceled due to heavy accumulation of snow on the runway and absolutely zero visibility.

Redmi 9 Prime starts getting MIUI 12 update in India: All you need to know