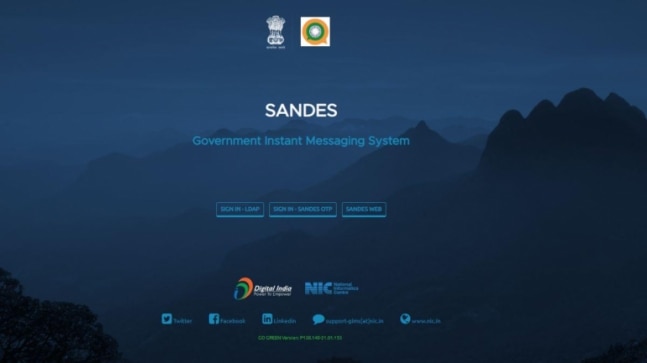 Sandes, a desi alternative to WhatsApp for government officials.

Some government officials are now using a desi alternative to WhatsApp called Sandes, a report on Monday said. Last year, the Indian government confirmed plans on working on a WhatsApp-chat like feature, and it seems the app is now ready and is being initially tested by ministry officials.

Business Standard reports that officials in some ministries have already started using the GIMS or short form for Government Instant Messaging System. Last year, several reports claimed that the government made chatting app may be called GIMS. However, it turns out that the messaging app has now got a desi name.

The gims.gov.in page does give away the name confirming Business Standard's report. It also confirms some ways to log-in including sign-in LDAP, sign-in with Sandes OTP, and Sandes web. On tapping on any of the options, the page shows a message that reads, "This authentication method is applicable for authorised government officials." The report corroborates to earlier claims that the move to make a desi alternative of WhatsApp was taken to get government employees off the social media networks that may have compromised channels. The report adds that the use of Sandes is restricted to government officials currently. However, a broader rollout cannot be ruled out later.

The report adds that the Sandes is app can run on both iOS and Android platforms. It also supports voice and data, similar to modern-day chatting apps. It also adds that the Sandes app's backend is handled by the NIC, The National Informatics Centre, which comes under the Ministry of Electronics and Information Technology. The NIC provides the infrastructure to help support the delivery of government IT services and the delivery of some of Digital India's initiatives.

The timing of Sandes could be interesting, considering WhatsApp will also be pushing its new privacy policy that shares more data with the parent company, Facebook.

Alexa completes 3 years in India, interaction with voice assistant increased by 67 per cent in 2020