The video test feature on Speedtest iOS app will play an actual video for users to give them an idea of the streaming quality. It will also inform users about the deal device on which they can stream the video. 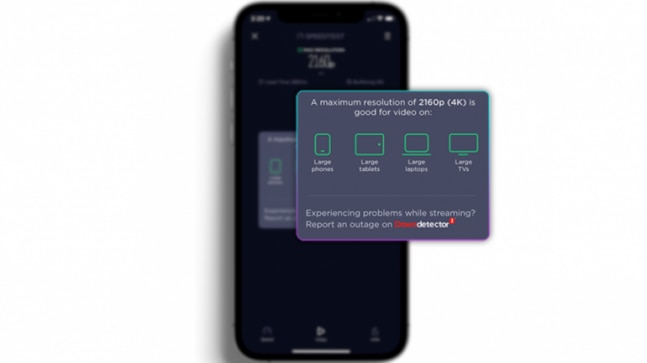 Speedtest app by Ookla is a network measuring app that gives users the idea about the overall network bandwidth to provide reliable internet performance data. Speedtest for iOS is now rolling out the video test feature that will give users information about the performance of video streaming on their networks. According to Ookla, which analyses and tests data globally, "the video testing from Speedtest plays an actual video to specifically measure the performance of video streaming on your network at any time."

The company, in a blog post, noted that to measure an accurate video, an actual video has to be played as video traffic cannot be simulated across a network. It also noted that providers routinely prioritise video traffic differently than other traffic and that video can perform very differently than the rest of the things you do online regardless of how fast the download speed of your network."

It further noted that a video test will also inform users which devices work best at that performance level. This will help users decide whether to try to stream on their largest TV or their phones. As of now, the video test feature is available on Speedtest's iOS app and will soon be available on more platforms. The test can be accessed from a tab at the bottom of the app. Users need to tap the video icon in the menu bar at the bottom of the app to get started.

"Streamed video content is typically delivered via adaptive bitrate technology, which adjusts the quality of the video stream based on network conditions," Ookla noted. "A video test measures this adaptive bitrate to tell you the maximum resolution, load time, and buffer you should be able to expect given current network conditions," it added. The test lets users assess if they will get to watch a video seamlessly or if they should watch it another time as they could be subject to a lot of buffering.

Ookla has also added more features on the Speedtest app like the network and device information, server selection, and Speedtest settings preferences that will be available in the sliding drawer at the bottom of the speed tab. It will also add users' results history, including video test results, app settings, privacy policy and terms of use, and support resources are available in the hamburger menu in the upper corner of the app.

ALSO READ: | Tech Tips: How to hide your online status, profile picture and other privacy settings on Telegram
ALSO READ: | What is going on with Elon Musk, Doge, Tesla and Bitcoin? Here is the story so far
ALSO READ: | Google Meet rolls out Green Room feature, will give users quick preview of settings before joining a meeting