Spherical Echo, flying security cam and all other products Amazon launched at its event

The tech giant introduced the new version of Echo Dot, an all-new Echo Show, a few ring products, and a flying security camera. 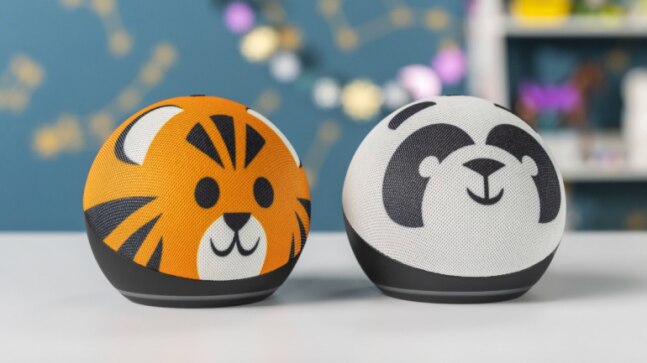 Amazon laughed products of all shapes and sizes at its virtual event on Thursday. The tech giant introduced the new version of Echo Dot, an all-new Echo Show, a few ring products, and a flying security camera. However, what grabbed everyone's attention was the speakers that looked like a ball, the flying camera, and a screen that faces you, wherever you go.

Amazon did announce some really quirky products in an hour-long event out of which only some of them would make it to India, rest would only be available in the United States and other counties. So here is a roundup of what all Amazon launched at its hardware event.

The Echo Dot is round in shape with a fabric finish and plastic outlines to give it a more speaker-like finish otherwise your dog could think it a ball. It seemed like one product everyone would add to their decor when it was announced by Amazon last night.

However, do not go by its looks, it has got quite a powerful tech on the insides that drive the show here. The Dot is powered by Amazon's first-generation AZ1 Neural Edge processer. "With AZ1, powerful inference engines can run quickly on the edge—starting with an all-neural speech recognition model that will process speech faster, making Alexa even more responsive," Amazon said about the processor. Echo dot houses a powerful 1.6-inch, front-firing speaker, that produces crisp vocals and balanced bass.

A kid's edition of the Echo Dot has also been launched with some attractive art on the speaker that would appease the younger lot. The device has been launched in three colors including Charcoal, Glacier White, and Twilight Blue.

Amazon launched a flying security camera that would fly around in your house like a mini drone and keep a check on everything. Sounds fun? The company says that it gives special attention to privacy as the sound of the device is loud enough so once it is near, people will get to know about it. However, if you are not comfortable with the idea of something looking at you all the time, you can deactivate the camera and let it rest.

Adding yet another speaker to the Echo series, Amazon unveiled the Echo Show 10. Out of all the other things that the smart speaker can do, the thing that could excite or frighten you the most is its ability to follow the user. The speaker will turn its screen in your direction if you move around in the room.

It can also double up as a remote camera, that will help users in keeping a check on their kids or dogs or anything that worries them. The video footage can be accessed on another Echo device or the Alexa app.

Redmi 9 Prime India sale today: Key features, price and everything else you need to know