Spotify premium subscribers will soon have the ability to download music onto their Apple Watch for offline listening. 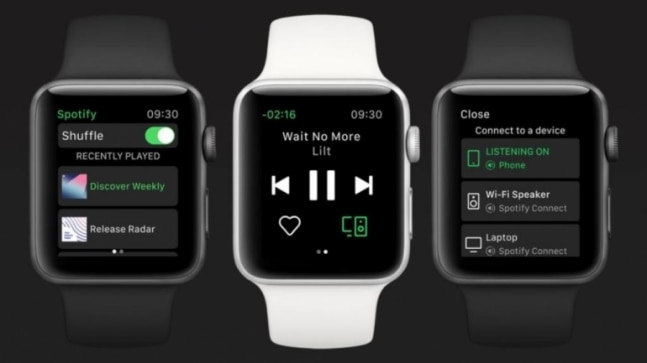 The Swedish music streaming giant, Spotify announced on Saturday that it is finally making offline music listening available for the Apple smartwatch users.

Apple Watch users can now enjoy a phone-free offline listening experience. Spotify in a new ad talks about how you can "download your playlists to take your Zen with you". However, a premium subscription is required in order to let you listen to your favourite playlists on your smartwatch. That means users will be able to leave their phones at home when they go jogging or cycling.

The new feature works more or less like standard downloading and sharing. To download songs or podcasts the users can click the three dots option () next to an album, playlist, or podcast and click 'Download to Apple Watch'. Once downloaded; green arrows will populate next to the title of the playlists, albums, and podcasts that are downloaded on your Apple Watch, thus letting you differentiate downloaded content from others. One can pair the headphones with the watch and stream the downloaded data directly from the wearable device.

A little green arrow indicator next to the names All you need to do is to connect your headphones to your Apple Watch and start listening to the music without requiring you to carry your iPhone around.

Users can control playback with the new feature, seamlessly playing, pausing, and skipping tracks or podcast episodes directly from their wrist.

Apple already has its inbuilt music feature- Apple Music which is one of the biggest competitors of Spotify in its category and Apple Music is already available for streaming offline music on Apple Watch.

The new overall experience for Spotify on Apple Watch is rolling out to all users globally over the coming weeks.

OnePlus TV 40Y1 set to launch in India on May 24: Expected price, specifications