Spotify customers will now be able to listen to music and podcasts at a stretch using a mini player while scrolling within Facebook. 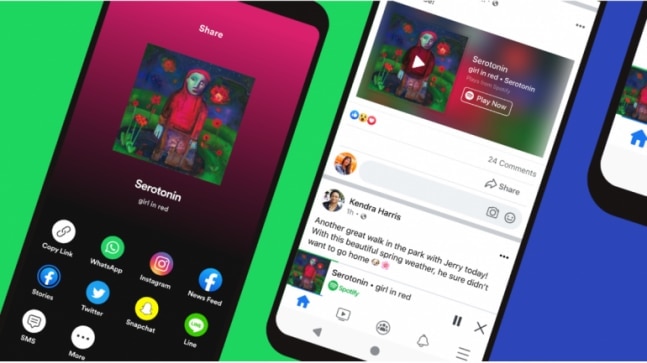 Spotify users will now be able to listen to full songs on the Facebook app. The development comes shortly after Facebook announced its plans to expand its audio offerings. The feature is now available in 27 markets where paying Spotify customers will be able to listen to music and podcasts at a stretch using a mini player while scrolling within Facebook. The mini player is an extension of the social sharing option already supported within Spotify's app. With the new mini player available on Facebook, Spotify users will be able to share content to Facebook by tapping on the Share menu in the upper right screen and then select Facebook or Facebook Newsfeed.

Users can access the mini player by tapping on the play button on the mini player that their friends or family have shared on the Facebook feed and will also be able to share it. Users will be required to log in to Spotify the first time they use the miniplayer, by tapping on Connect to continue. Users will have control over playback options so you can pause or dismiss the miniplayer.

In 2019 Facebook and Spotify made a deal to allow short music clips from Spotify to be posted on Facebook Stories. The current development is an expansion of that deal. The announcement comes a week after Facebook CEO Mark Zuckerberg laid out Facebook's plans to build out its audio suite slated to launch in the coming months. The audio products will include an audio version of Rooms, which will be similar to Clubhouse.

Facebook audio products will also feature soundbites which is a short-form audio product that will feature a stream of brief clips. Zuckerberg had noted that soundbites will be like an audio version of Reels, a short video format that was introduced by Facebook last year. Users will be able to share individual clips to their News Feeds, or they can consume a string of audio clips joined together and algorithmically distributed in a feed. Facebook will also roll out podcasts, and it will build a podcast discovery tool for creators to share their podcasts with users on the platform

Over 170 million people are connected to Facebook pages centered on podcasts, and some 35 million users are members of podcast fan groups, news agency AFP reported. Until the launch of the mini-player, listening to music or podcast on Spotify required leaving the social network.