Apple Watch dominates the smartwatch segment again, captures a third of market in terms of volume

According to the latest Counterpoint Research report, Apple yet again maintained its top position in terms of volume and recorded a 50 per cent year-on-year increase in Q1 2021.

Counterpoint's Senior Analyst Sujeong Lim says that Apple managed to increase the smartwatch market share by widening the portfolio from Apple Watch SE to Apple Watch Series 6 last year, and that has helped the company.

Coming to the smartwatch OS platforms, Counterpoint Research data shows that Apple's watchOS also led the segment compared to other platforms. Based on the new data, watchOS captured over a third of the market. Notably, the report mentions that Google's Wear OS has so far not received such record growth in the smartwatch segment. The data further shows that Wear OS is available on less than 4 per cent of smartwatches. 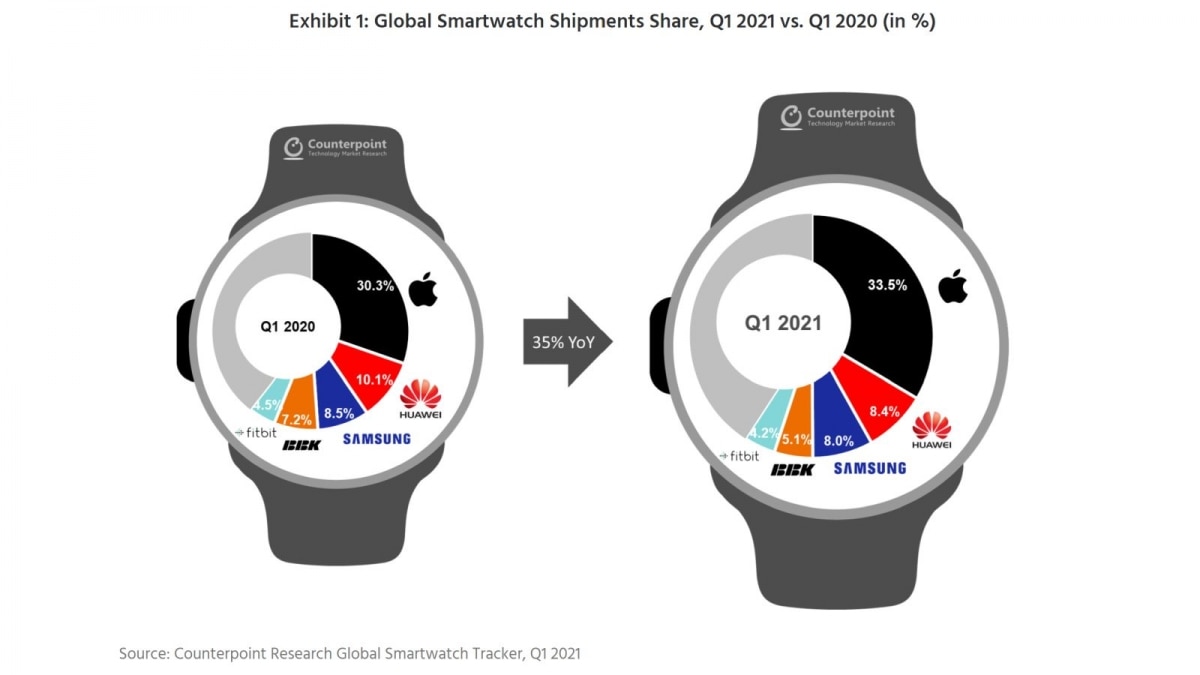 With Google announcing a partnership with Samsung for the wearable segment, we can expect the Wear OS (Tizen OS) market share to increase in the next couple of years. The upcoming Wear OS version is likely to pack the best of Tizen OS as well as Fitbit OS. While Google or Samsung hasn't revealed any timeline for the first product featuring the new smartwatch OS, we can expect the widely rumoured Pixel Watch to be among the first to run it. We can also expect Samsung's next-gen Galaxy Watch to feature the new OS.

Lim, on the upcoming Wear OS version and new smartwatches, said, "Hopefully, Google's new Wear platform will be shipping in the next generation of the Galaxy Watch series in late Fall. It will be good for the companies involved. The focus would be to not only improve performance, such as battery life, but also improve on the AI, newer apps and services, and integration with Android smartphones. Samsung will also be able to better target the broader Android smartphone user base. With the completion of the acquisition of Fitbit, Google should be able to enhance the Wear platform with 'fitness' capabilities and services integration, moving forward."

The important thing to note here is that if Google and Samsung bring their new smartwatches running all-new Wear OS by the second half, they might face a stiff challenge from Apple's upcoming Series 7 model that is likely to launch by September 2021.