The Google Pixel Fold is supposed to be the first foldable device by Google. It has been seeing plenty of leaks in recent times. Keeping that in mind, we decided to detail everything known so far about this rumoured foldable smartphone.

The Foldable smartphone market is growing at a steady pace, but that might change soon as a bunch of manufacturers are working on releasing a foldable device this year. This also includes Google, which is reportedly preparing to release its first foldable device in 2021. The software giant is relatively new in the smartphone industry and has not tasted a lot of success with its hardware game. So it will be interesting to see as to what Google has on offer with the upcoming Pixel Fold.

According to the reports, Pixel Fold will arrive later this year. The device is also hinted to feature Samsung's ultra-thin glass (UTG) displays which is currently exclusive to Samsung Galaxy Flip and Galaxy Z Fold 2. We have also seen a few hinge patents from Google, the recent one showcases a book like the foldable design as seen on most foldable smartphones. Besides this, a device codenamed "Passport" has also been spotted in the Android 12 code.

These leaks somewhat confirm the existence of Google Pixel Fold. So as to keep you'll updated with the latest information available, we decided to detail everything known so far about this foldable smartphone.

--We have been seeing leaks around the Google Pixel Fold for quite some time now. In one of those first major leaks, 9to5Google found hints about an upcoming foldable smartphone from Google. Last month, the same publication found out codenames of the devices to be launched by Google this year. These codenames, along with the model numbers, were discovered while digging the Android 12 beta code. Moreover, the model numbers mentioned below are for the Japanese models of the Pixel 6, Pixel 6 Pro and more.

--The codename Passport with model number GPQ72 is believed to be the Pixel Fold. However, that alone cannot confirm its launch alongside Pixel 6 this year.

--Google has filed multiple design patents for a foldable device which seem to be really helpful in determining the design of the rumoured Pixel Fold. A fresh patent discovered by Patently Apple reveals a tablet-like foldable design that can be stretched a little further when open. This is a brand new design that could make the Pixel Fold stand out from the crowd. However, it's unlikely that the brand will go with an unestablished design for its first foldable smartphone. 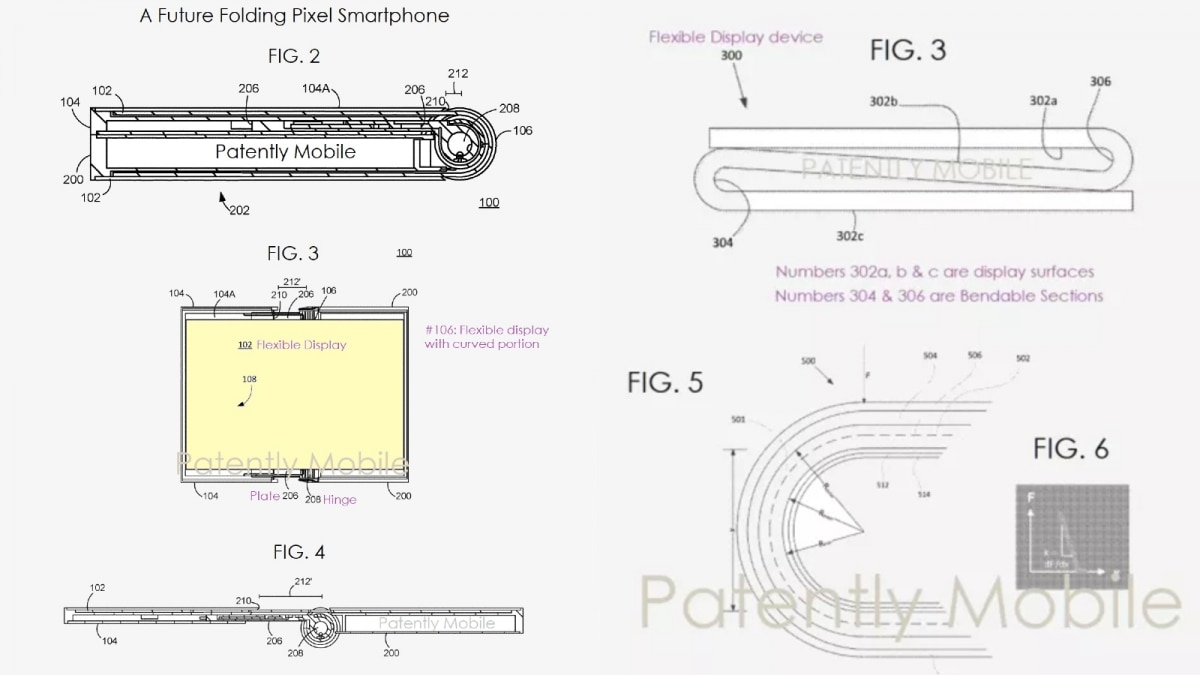 --Other two patents showcase a conventional clamshell design similar to the Galaxy Z Flip, whereas the other talks about a Z shaped triple-fold design that unfolds into a tablet. Google seems to be playing with plenty of designs for its first foldable smartphone. But it's tough to predict if any of these designs will make a way in the upcoming model.

--From what we have learnt, Google will be sourcing OLED displays from Samsung for the Pixel Fold. This is supposed to be a 7.6-inch panel similar to what has been rumoured for the Galaxy Z 3's internal display. In addition to that, the Pixel Fold is tipped to feature Samsung's ultra-thin glass (UTG) display. This is supposed to make the internal display on Google's upcoming foldable device less fragile.

--A YouTuber named Waqar Khan has also shared renders of the Google Pixel Fold. These renders are based on the Pixel 5 design but seem far from reality.

--There are barely any spec leaks around the Google Pixel Fold. However, considering the premium nature of Foldable devices, it's likely that Google will pack in high-end hardware on its foldable smartphone. That said, the smartphone could be powered by Qualcomm's flagship Snapdragon 888 SoC. It is an octa-core chipset based on a 5nm manufacturing process and coupled with Adreno 660 GPU. The chipset could be coupled with up to 12GB of RAM and 512GB of onboard storage.

--Apart from this, we have also heard about an in-house chipset codenamed "Whitechapel". This chipset is being developed by Samsung and is expected to make its way in the upcoming Pixel 6 series. In case this turns out to be true, the Pixel Fold could even ship with this rumoured chipset.

--The cameras on Foldables phones are still not as good as seen on traditional phones. Hence, Google can benefit from this void of camera-centric foldable smartphones. The brand has been able to deliver stellar camera performance even with limiting hardware. But we would definitely like to see more cameras on the Pixel Fold.

--A taskbar similar to windows was spotted in Android 12 DP2 for large screen devices and foldable phones, which makes us presume that Google is working to develop multitasking abilities on the upcoming Android 12.

Several predictions are being made about the launch of the Pixel Fold. Jon Prosser says that the smartphone may launch later this year or in early 2022, whereas Display analyst Ross Young believes it could arrive in quarter four this year.

A report from Elec says that Samsung will begin the production of OLED displays in October this year. Going by this report, we may not see Pixel Fold alongside the Pixel 6 in the hardware event later this year. As Google usually launches in October every year.

Unlike the launch timeline, there's hardly any leak that talks about the pricing of the Google Pixel Fold. Also, there's no price history, as this is going to be the first Foldable device from the brand. So, we're bound to rely on the pricing foldable available in the market right now.

The Samsung Galaxy Z Fold 2, the closest competitor to the upcoming Pixel Fold, is currently priced at Rs 1,35,000 in India. Keeping that in mind, we expect the Pixel Fold to arrive at a starting price of Rs 1,10,000 in the country.