Solapur-based Mayur Fartade, who possess skills like C++, Python, was able to spot the bug that allowed hackers to view targeted media on Instagram.

Facebook has awarded Rs 22 lakh to an Indian hacker for discovering malicious bugs on the Instagram app. The bug that was discovered allowed anyone to view archived posts, Stories, Reels and IGTV without following the user, even when the profile is private. Although Facebook had now addressed the issue, the bug if remained untouched would have let hackers gain illegal access to the private pictures, videos of users without following them.

Solapur-based Mayur Fartade, who possess skills like C++, Python, was able to spot the bug that allowed hackers to view targeted media on Instagram. The bug could have exposed a user's private photos including private/archived posts, stories, reels, IGTV without following the user using Media ID. He explained in a detailed post on Medium that the attacker could also store photos, videos and details about specific media by brute-forcing Media ID's.

Fartade first reported about the Instagram bug through the Facebook Bug bounty program on April 16. He got a response from Facebook on April 19 where the social media giant requested him to provide further information about the same. On April 29, Facebook patched the vulnerability and on June 15 he was finally awarded Rs 22 Lakh for unearthing the dangerous bug.

Facebook in its letter to Fartade thanked him for his report. "After reviewing this issue, we have decided to award you a bounty of $30000. Below is an explanation of the bounty amount. Facebook fulfils its bounty awards through Bugcrowd and HackerOne. Your report highlighted a scenario that could have allowed a malicious user to view targeted media on Instagram. This scenario would require the attacker to know the specific media ID. We have fixed this issue. Thank you again for your report. We look forward to receiving more reports from you in the future!" the letter read. 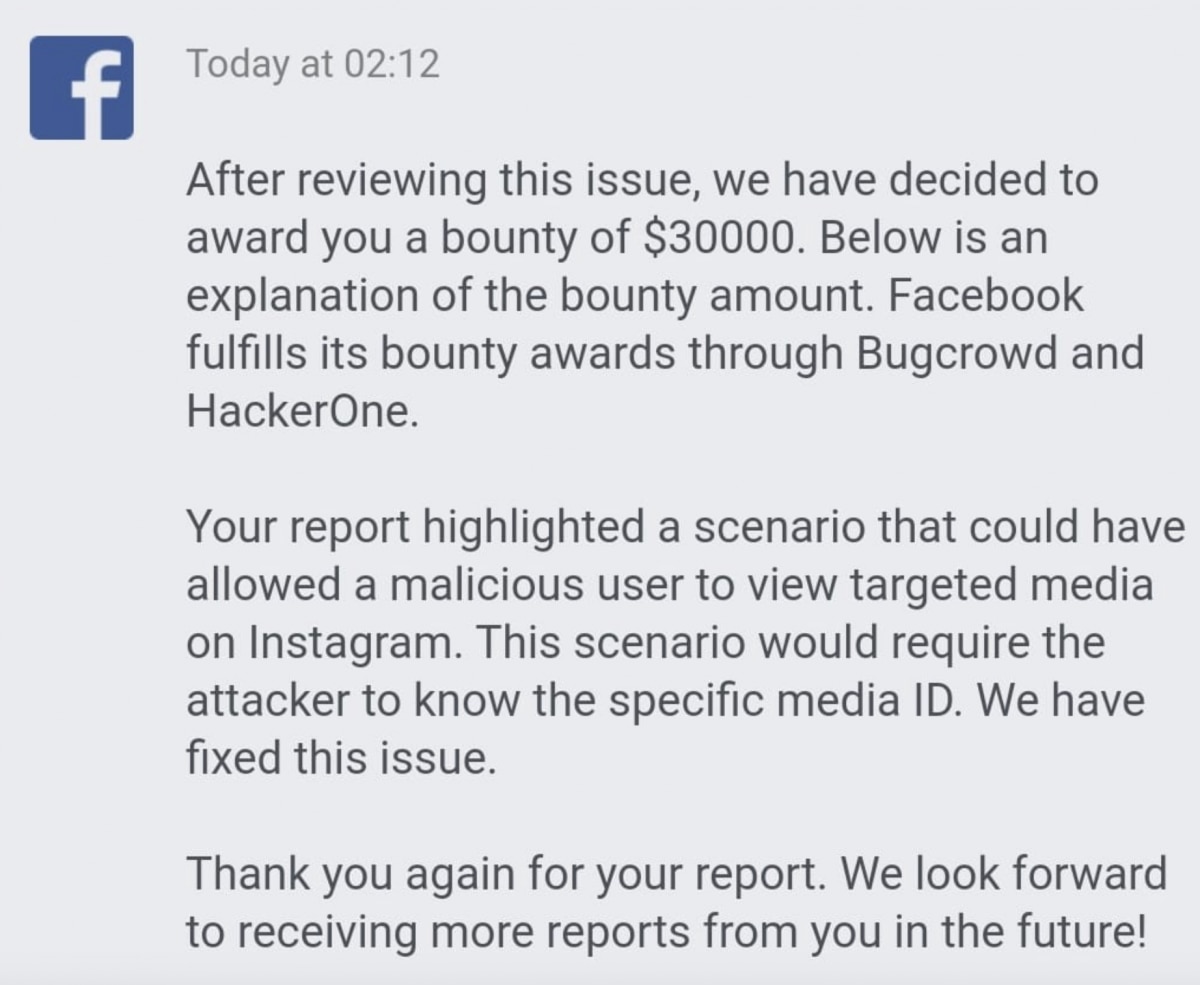 Fartade, who is a computer science engineering student, said that he was testing the Instagram app for a week but did not find any bug initially. But later when he dug deeper into the features like insights, promotions, he was able to spot the malicious bug on Instagram. Fartade, who is only 21 years old, said that this was his bounty he has reported bugs with government websites when he was in the second year of college. He wishes to pursue bug bounty hunting as a part-time thing but wants to become a software developer.