A new rumour points out the possible changes that Apple will be bringing in the next version of iOS during the WWDC 2021 next month.

Apple is set to begin its WWDC 2021 developers conference in a couple of weeks. Among other announcements, the tech major is expected to showcase its new version of iOS during the virtual-only event. New rumours now provide us with a hint of what to expect from this iOS 15 reveal.

The rumour originates from speculations by Connor Jewiss about the iOS 15. Taking to Twitter, Jewiss recently shared his learnings on the new OS by Apple. Among other upgrades, Jewiss hinted at a new lock screen as well as new notification settings for the iOS 15.

This is not the first time that new notification options on the upcoming iOS have been hinted at. Similar speculation was made in a Bloomberg report earlier this year. The report pointed at a feature that will allow iOS users to customise alerts as per the current activity or time. There might also be an update for Notification banners.

The upgrades, however, will not be limited to these. Jewiss now suggests several previously unknown changes in iOS 15. One of these is a new food tracking feature on the Health app. If or when rolled out, the feature will help iOS users keep track of their dietary intake right through the app. 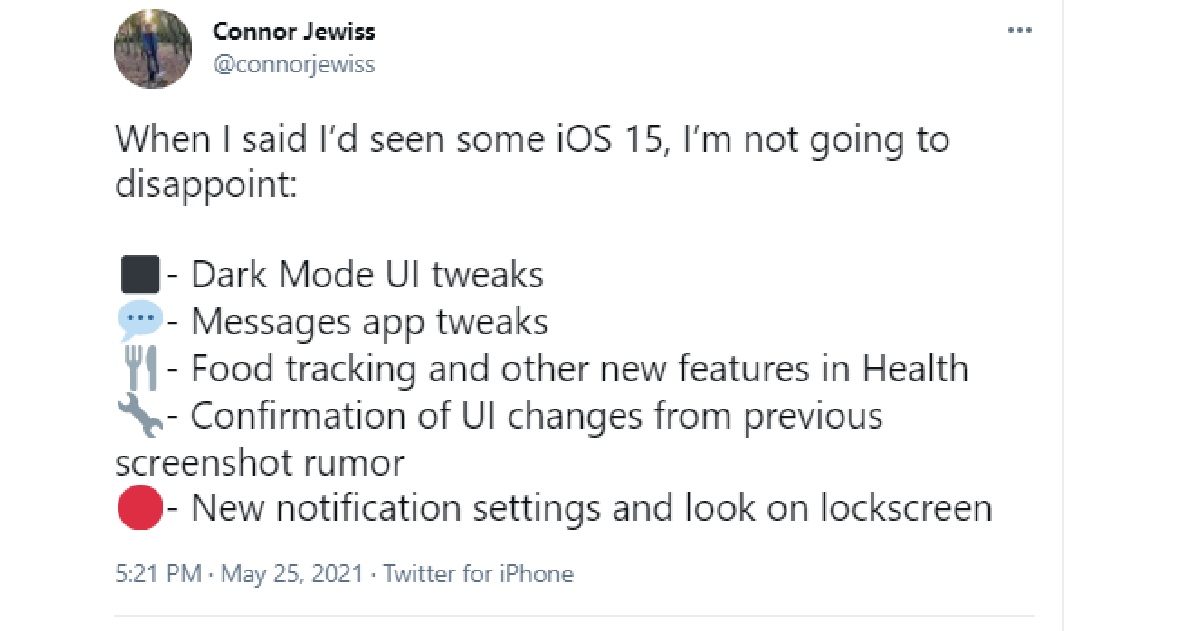 As pointed out by 9to5mac, this update sits in line with Apple's recent survey for Apple Watch users, asking questions about their preferred device for monitoring eating habits. This, coupled with the expected glucose monitoring feature on the upcoming version of the Apple Watch, can be a game-changer for Apple's Health app.

Other updates that Jewiss suggested will bring some changes to the user interface of the Dark Mode as well as the Messages app on iOS 15.

Note that Jewiss is not a noted tipster, and this is possibly the first time such a leak is being shared by him. The promise of these updates is hence bleak based on the tweet, but they are in line with everything that we know about Apple's efforts on the new iOS to date.

Other than the iOS 15, Apple is also expected to announce updates for its iPadOS, macOS, and watchOS at the WWDC 2021. Stay tuned with us to get all the updates from the major tech event and when they are revealed.