Xiaomi is set to introduce its first Smart TV accessory, the Mi TV Webcam, in India at 12:00 pm on June 24.

Xiaomi has expanded its line of Android-based Smart TVs since 2018. However, the company still does not offer a single accessory for any of its Smart televisions. Now, the Chinese tech giant is finally all set to introduce its first Smart TV accessory, the Mi TV Webcam, at noon on June 24.

Xiaomi shared the launch news using its Twitter handle. The company has also created a microsite on its official website revealing key specifications and features of the upcoming Mi TV webcam.

According to Xiaomi's microsite, the upcoming webcam will be externally attachable and will support full-HD video calls via Google Duo. Mi TV Webcam also has features like a physical privacy shutter and dual far-field microphones with 3D noise reduction technology. The device also has a magnetic clip for sturdy grip while clipping on the TV. 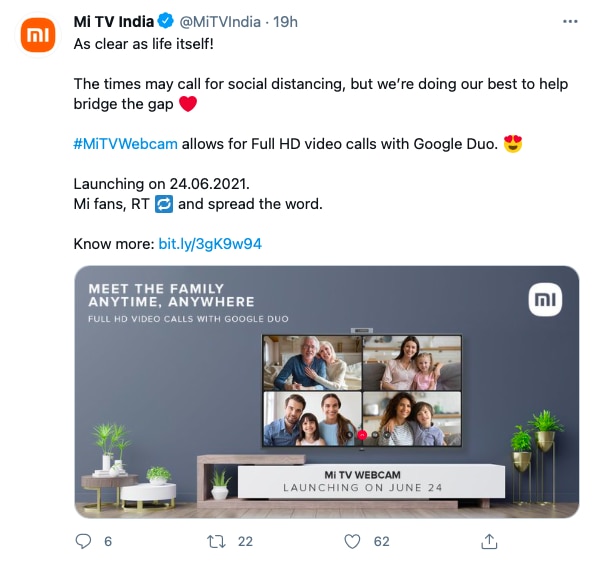 A tipster @heyitsyogesh revealed on Twitter that this webcam is the same as the OnePlus TV Camera. It is an ODM product made by Seevo. The only difference between the two is the branding on the privacy shutter.

He further revealed that the Mi TV Webcam would be priced under Rs 2,500 and have a USB-C port.

The Mi TV Webcam is not the only product being launched by Xiaomi this week. The company is set to launch its new affordable smartphone Mi 11 Lite, at 12:30 PM today (June 22). The Mi 11 Lite is said to be the slimmest and lightest smartphone of 2021. The smartphone was launched globally back in March in both 4G and 5G variants, however, only the 4G variant will be launched in the Indian market initially.

Xiaomi has revealed on the Mi TV official Weibo channel that the new flagship TV 6 Series will be launched in China on July 28.