The new update brings the photo storing experience on Microsoft OneDrive closer to that on Google Photos. Notably, as of now, users can only edit JPEG and PNG image formats. OneDrive's photo editing features include mirroring, rotating, manual cropping, and cropping to a pre-set aspect ratio, as well as brightness, exposure, contrast, highlights, shadows, saturation, and basic colour correction.

Microsoft aims to offer the picture editing feature to business and school users this summer and through its iOS OneDrive app later this year.

OneDrive will also make it easy to organise your images with a new management tool. Now when pictures are uploaded to OneDrive, they can be automatically placed in different folders based on the origin of the image. So now photos from social media apps, messaging apps, screenshots, etc., will be moved to their respective folders. 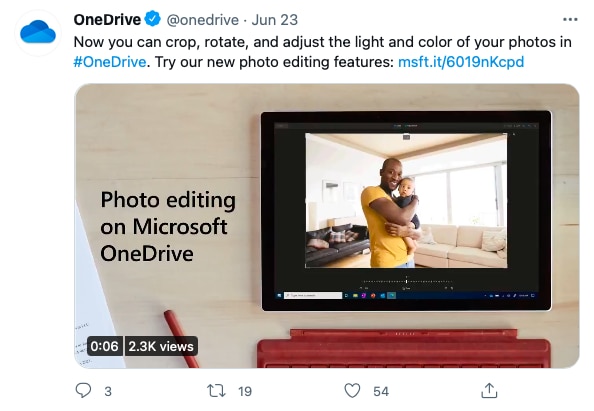 Additionally, users can easily filter through their images with a new filter option, making it easier to view photos from select folders. This feature is available now, although automatic folder uploads will arrive soon.

Another new feature in the app is that photos and videos can be streamed directly from your Android mobile to Chromecast devices for easy viewing on your TV. This means users can cast videos and photos on their smart TV with a Chromecast-enabled device and television.

These updates are a part of a series of new enhancements that the company is set to deliver over the next year. Microsoft further pointed out that the company remains committed to securing users privacy and does not scan any photos, files, or personal content to target ads to users, nor does it share data without permission.

While OneDrive still has a long way to go to reach feature parity with Google Photos, however, these are big changes towards OneDrive becoming a more robust offering like Google Photos. The update has started rolling out and should be available for OneDrive for Android and OneDrive for the web.

The distribution for all Microsoft users is usually in waves, so it may also take a few days. The new functionality will be followed in the iOS app at a later time.

Also Read | iPhone 14 is likely to be cheaper in 2022 because iPhone 12 mini is going away
Also Read | Windows 11 launch today: How to watch live stream and everything Microsoft is expected to announce
Also Read | Airtel, Jio and Vi new bulk data plans with 60 days validity Vs regular prepaid plans under Rs 500