A day ago IT Minister Ravi Shankar Prasad slammed Twitter for failing to comply with India's new IT Rules 2021. His tweets came over 5 years after he had praised Twitter for its stance on freedom of speech.

Call it a love affair that has ended. Five years ago IT Minister Ravi Shankar Prasad had lauded Twitter for standing up for the freedom of expression and advancing the cause of free speech. In a gushing tweet, complete with emoji of red heart, the IT Minister shared his appreciation for the social media site with hashtag #LoveTwitter. However, his latest tweets go in another direction. Just a day ago on June 16, the minister berated Twitter in strong words, terming the company "over-enthusiastic about its fact-checking mechanism" and failing to comply with India's new IT Rules 2021.

The Minister's tweets on June 16 are sure to draw attention to one of his tweets made on March 21, 2016. At that time, in his tweet, he said: "Freedom of expression and information sharing has got new strength from social media. Proud of contributions of Twitter to that.#LoveTwitter." On June 16, IT Minister Prasad launched a scathing attack over its non-compliance with new IT rules. He posted a series of tweets accusing Twitter of being "over-enthusiastic about its fact-checking mechanism" and went on to criticise the company for "portraying itself as the flag bearer of free speech."

The Minister now feels that Twitter is dubious. "It is astounding that Twitter which portrays itself as the flag bearer of free speech, chooses the path of deliberate defiance when it comes to the Intermediary Guidelines," he wrote on June 16. 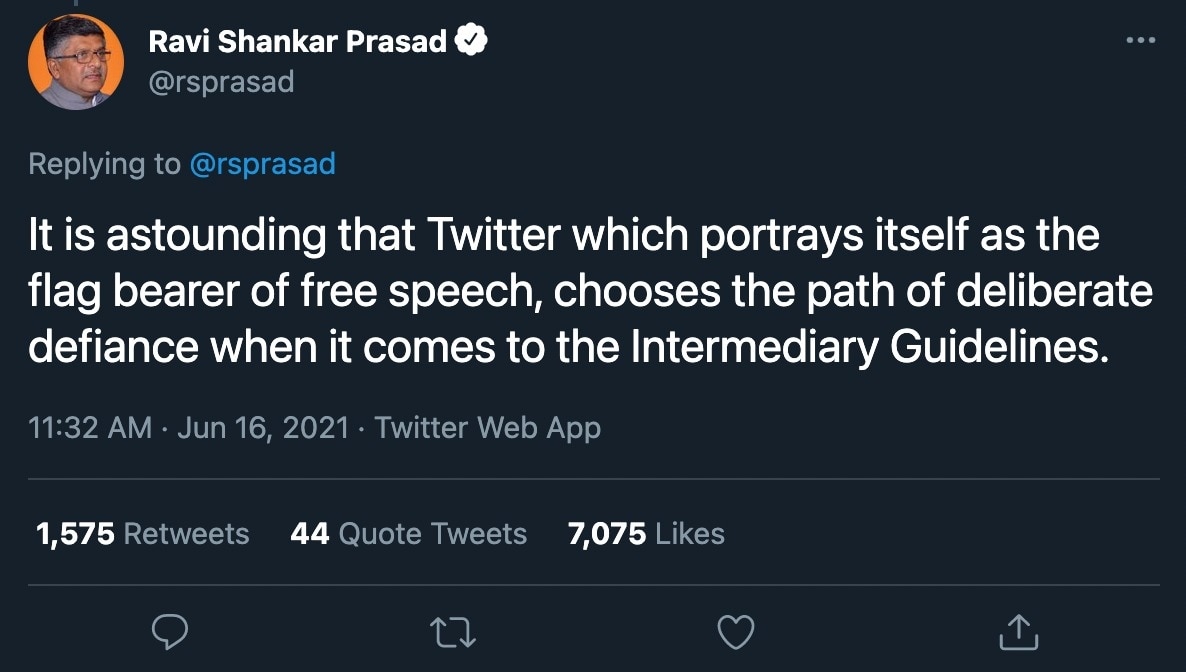 It's worth noting that five years is a long time, and it is possible for people to change their opinion as new facts come into the picture or when circumstances change. It is clear that circumstances have indeed changed. Either Twitter is no longer the same company with the same policies around freedom of expression as it was in 2016, or the Indian government no longer looks at the whole issue in the same way as it did earlier. But irrespective of the new circumstances, it is clear that Twitter and the Indian government no longer have the same feelings for each other.

Then in February, the government came out with new rules that tech companies like Twitter have to follow in India. Now, the government is saying that Twitter is not in compliance with those rules.

At the same time, Twitter has also faced some probing questions from Indian law enforcement agencies after the company tagged a few images tweeted by a BJP spokesperson as "manipulated media." The social media company, often but not always and in a unilateral decision, calls out videos and photos that it believes are fake by tagging them "manipulated media."

Currently, the Indian government says Twitter has not complied with the new IT Rules 2021 that came into force on May 26. Prasad highlighted in his tweets that Twitter was given extra time to comply with the rules but "deliberately chose the path of non-compliance".

"The culture of India varies like its large geography. In certain scenarios, with the amplification of social media, even a small spark can cause a fire, especially with the menace of fake news. This was one of the objectives of bringing the Intermediary Guidelines. It is astounding that Twitter which portrays itself as the flag bearer of free speech, chooses the path of deliberate defiance when it comes to the Intermediary Guidelines," said the Minister.

The government argues that Twitter's non-compliance with the new IT Rules means that it has lost its status as an intermediary, and now it can be held responsible for user-generated content. Although, some legal experts claim that which website is an intermediary and which is not in India can only be decided by a court.

Twitter, in its defence, has said that it is taking longer to comply with fresh Indian government requirements because it is setting up a new office in India. "We are making progress with relation to establishing an appropriate local office for Twitter Inc with the advice of consultants in India. We have been advised that it is necessary for us to establish this office prior to hiring the CCO and other officers on a permanent basis," Twitter said in a statement.