Elon Musk conducted a poll where he asked users whether they agree with his "peace" solutions. He suggested that Ukraine should remain neutral and not join a political bloc.

Tesla CEO Elon Musk, who was once praised for restoring internet connectivity in Ukraine via Starlink satellites, is now facing backlash from the same citizens for a provocative tweet. Musk conducted a poll on Twitter and offered "peace" solutions to the ongoing Ukraine-Russia war. However, the tweet prompted some serious reactions from Ukrainian officials, including their President, Volodymyr Zelensky. Perhaps the harshest reactions came from Ukraine's outgoing ambassador to Germany, Andriy Melnyk, who dropped multiple F-bombs in reply to Musk's tweet.

On Sunday, Musk conducted a poll where he asked users whether they agree with his "peace" solutions. His solutions include:

-Redo elections of annexed regions under UN supervision. Russia leaves if that is will of the people.

-Crimea formally part of Russia, as it has been since 1783 (until Khrushchev's mistake).

In a separate tweet, Musk added that this is highly likely to be "the outcome in the end just a question of how many die before then". He even said that the ongoing war between the two countries could even lead to a nuclear war.

Following his tweets, an infuriated Ukraine President Zelenskiy responded with his own poll. He asked whether users like a Ukraine-supporting Elon Musk or a Russia-support Elon Musk. Musk's open acknowledgement of Crimea, which Moscow seized in 2014, as a part of Putin-led Russia even irked Ukrainian presidential aide Mykhaylo Podolyak. He wrote, "There is a better peace plan. 1. Ukraine liberates its territories, including the annexed Crimea. 2. Russia undergoes demilitarization and mandatory denuclearization so it can no longer threaten others. 3. War criminals go through international tribunals." As mentioned, Ukraine's outgoing ambassador to Germany, Andriy Melnyk had the sharpest reply to Musk and said, "Fuck off is my very diplomatic reply to you Elon Musk". In a separate tweet, he added, "The only outcome is that now no Ukrainian will EVER buy your fing tesla crap. So good luck to you."

Notably, President Zelensky fired Melnyk in July after he defended the legacy of a World War II nationalist leader who collaborated with the Nazis. 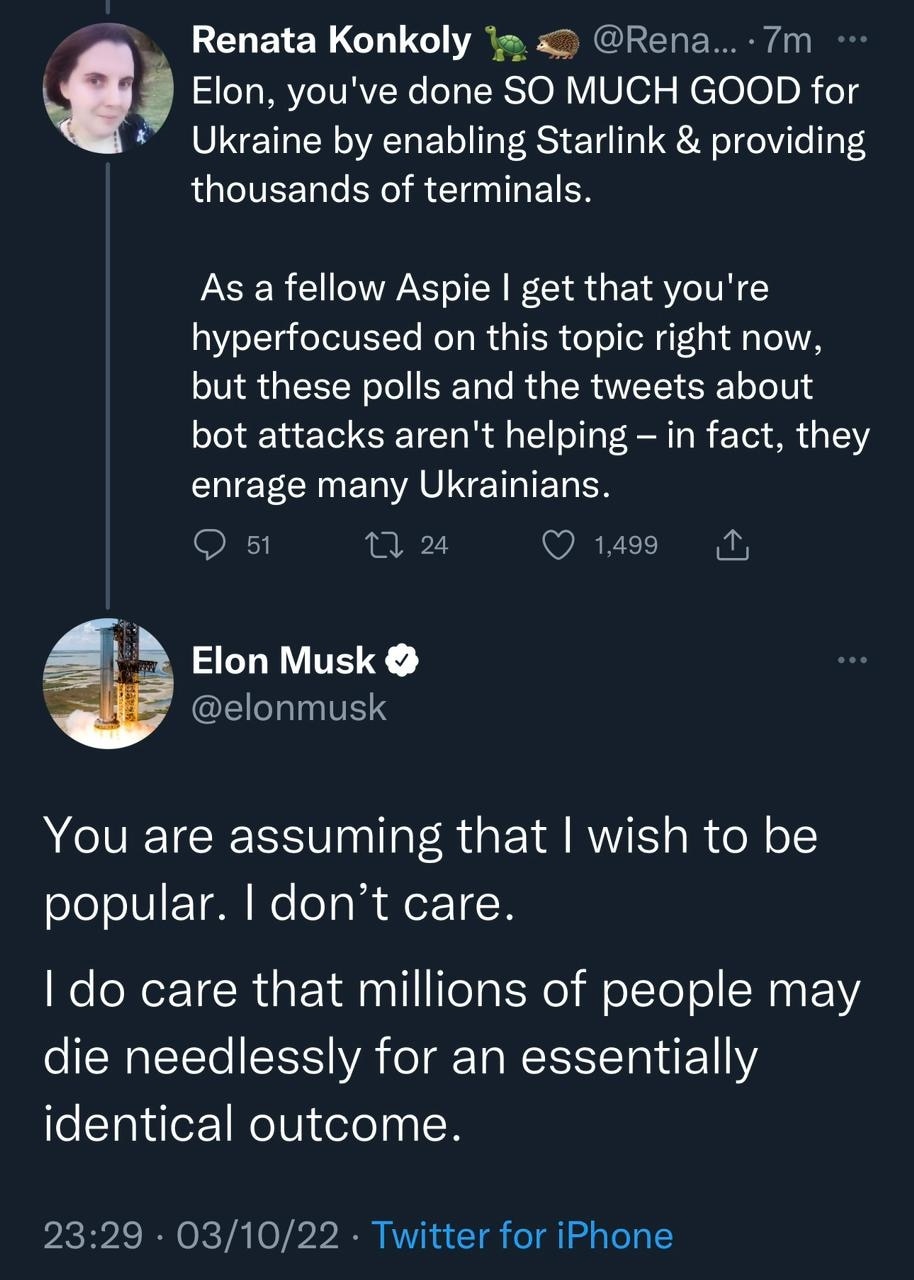 Meanwhile, he was also responding to tweets from other users. While lauding Musk for extending Starlink internet services to Ukraine at the height of the Russia-Ukraine war, a user said the tesla CEO is "hyperconfused" and his tweets aren't going to help Ukrainians. Musk replied and said that he does not wish to be popular. "I do care that millions of people may die needlessly for an essentially identical outcome".