Microsoft is going to launch Windows 11 as the successor to Windows 10 on June 24.

Windows 11 Start menu and apps are on the centre of the taskbar (Source: The Verge)
Shubham Verma
Story highlights

In what has ruined Microsoft's surprise reveal for June 24, Windows 11 has leaked online. First, just a few screenshots emerged on China's Baidu website, but moments later, the Windows 11 ISO file was dumped, giving thousands of impatient enthusiasts to try out the next-generation of Windows operating system. Windows 11 features a new Start menu, a new taskbar design, app icons, rounded corners for windows, and much more. Some of the new visual changes are actually borrowed from Windows 10X, which now lies buried.

According to screenshots of Windows 11 shared by people who managed to get hold of a copy of the ISO file, the biggest change is coming to the Start menu -- and this is similar to Chrome OS. Microsoft has moved the app icons to the centre of the taskbar and a new Start button, clicking on which opens a pop-up that reveals more applications and services you have installed on your PC. The tray area looks cleaner than before in what may be a simple way to access some functionalities directly from the taskbar. There is also a new Windows 11 boot animation and a startup sound to welcome you.

The biggest change coming in Windows 11 is to the Start menu, which now loses live tiles in favour of stationary icons to give a simplified look. I am not against this change, but live tiles are what make Windows a bit more beautiful and sometimes useful when these tiles show information while flipping. The app icons do not have animation, at least that is what I can see from this early version of Windows 11. You can pin apps and go to recent files from these icons. The Shutdown and Restart options are now available immediately on the Start menu. 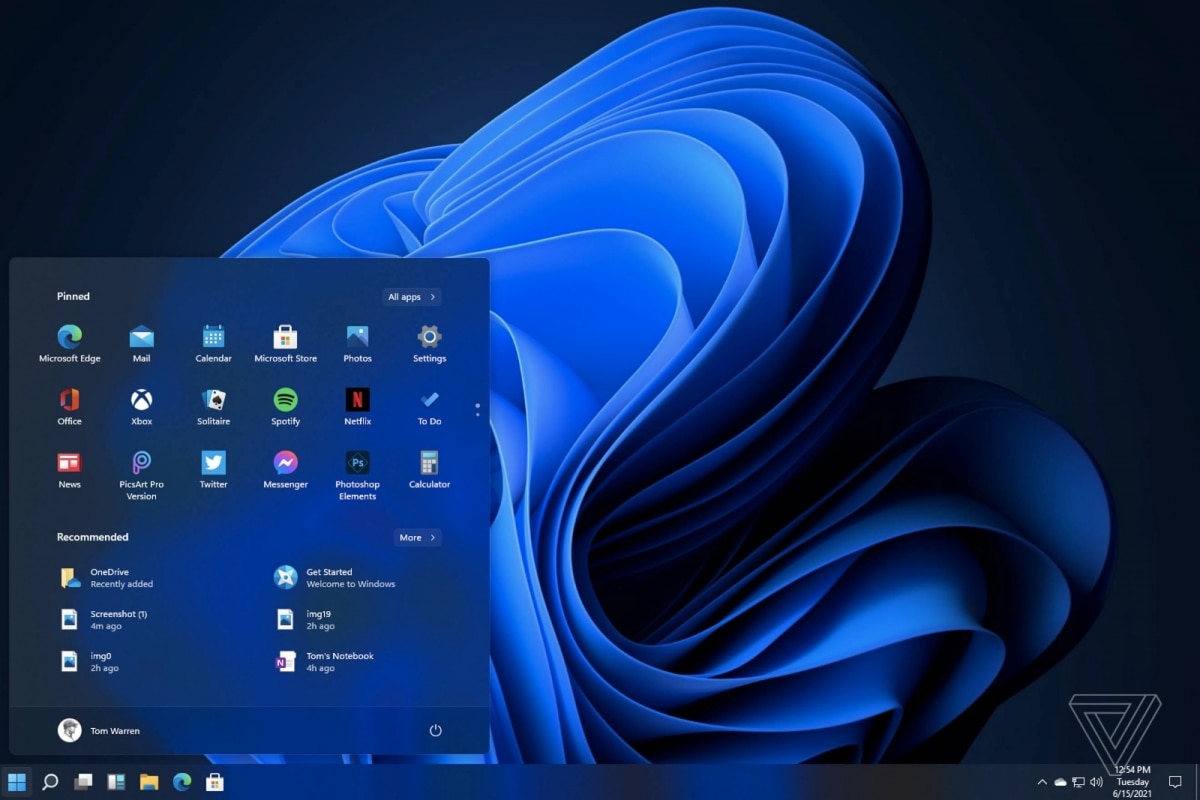 The repositioning of the Start menu and the apps does give a fresh look to Windows, but, for some reason, if you want the old style back, Microsoft has included a toggle in settings to fix it. With this option, you can move the Start menu and the icons to the left of the screen and taskbar. Windows 11 is also rid of Windows 95-era icons. You have a new multi-desktop icon, a new Settings icon, and a bottom bar for managing your account with quick options. The app windows have rounded corners, so that gives the OS a slightly different look, as well. Microsoft has included the dark mode on Windows 11, as well, but this new version looks a bit more beautiful than before. And also, Windows 11 has a new default wallpaper, which I very much like.

Microsoft seems to have brought back Windows Widgets with Windows 11, but it is not fully working because it is in the early stages. And that is because the Windows 11 build everyone is trying out is an early version. Most apps are not available in this build, but the overall feel looks finished. There are new snap controls available in the Maximize button for a window, which you can choose from to resize the window to half or a quarter and position it in one of the four corners of the screen. That is nifty because it saves you time to resize windows to fit more of them on the screen. This way, a simple click will do the job.

A major part of the visual changes in Windows 11 can be seen in the Xbox app. The Xbox app is now better integrated with the OS and brings the Xbox Game Pass to the frontier. The Xbox social network and the Xbox store are available, too, alongside the Xbox Game Bar and the Windows Game Mode.

For what it is worth, Windows 11 does feel like a new operating system because of how old Windows 10 has become now. This leaked Windows 11 ISO does ruin Microsoft's surprise, but there are still several things that are not quite available and that is what the event is for. Microsoft will also announce the Windows 11 Insider programme at the June 24 event, before the stable release takes place later this year. The Microsoft event starts at 8.30 pm IST on June 24.