OnePlus opened its R&D Center in Hyderabad on August 26 last year. A year on, we take a look at all that it has achieved, and all that it promises to bring to us in the year ahead.

Slowly but steadily, OnePlus has managed to become one of the biggest names in the tech industry in India. Its rather successful journey in India till now has seen the company emerge as a major force in the smartphone and TV business in the country. While much of the credit for its successes definitely goes to the hardware that it has launched, a major contributing factor has also been the company's efforts in coming up with meanigful innovations in software and UI tailored for the Indian audience.

Last year on August 26, the company almost made a public admission of this when it opened a new research and development (R&D) Center in Hyderabad. Planned to be developed at a cost of Rs 1,000 crore -- spread over the course of three years -- this new facility has been touted to create around 1,500 jobs when in full swing, and thus become the biggest R&D centre for OnePlus globally. At the time of its opening, OnePlus had announced that this R&D Center is being built to develop India focused features to OnePlus products that would subsequently be rolled out to other markets across the globe.

With the facility completing a year of operations today, we got in touch with Ramagopala Reddy, Vice President, OnePlus India R&D, to understand how this past year has been for the company's R&D team, and what plans they have for the year ahead for the country. Speaking exclusively to India Today Tech, Mr Reddy spoke about the various unique features that have been added to OnePlus' Oxygen OS to elevate the overall user experience. Here are the edited excerpts of our interaction with him.

OnePlus' R&D center has completed one year in India. What do you think has been the highlight of the year for the team?

India is one of our most important and dynamic markets. With over 5 million community members based in India, this is our most vocal user group and an integral soundboard that resonates the views of our communities worldwide. The driving force behind the inception of the OnePlus India R&D centre was to focus efforts on developing futuristic camera technologies, AI, networking, and connectivity, with a special focus on getting the OnePlus global community 5G ready. Our goal for the India R&D center was always to build on the promise of a burdenless experience, working hand-in-hand with the community for a more intuitive connection with users and their devices.

Through the year, the OnePlus R&D facility has broken boundaries to curate an experience which is universal yet intuitive for a specific region, sharing the knowledge bank and expertise to innovate on features, a fitting example of which would be the UX/UI design for the OnePlus Nord. In terms of the OnePlus Nord specifically, all features driven out of any R&D center were a result of collaboration and multiple levels of testing across regions, and the final say rests with the region driving the innovation, in this case India. The India R&D team has also contributed immensely to the software development efforts and has led OxygenOS development on the OnePlus Nord, which included development towards camera software, 5G network optimizations and OxygenOS customizations.

In addition to the above contributions, the team has worked relentlessly towards the development of features like Work Life Balance, OnePlus Sports and the all new OnePlus Scout, which allows users to find anything on their device using the current app drawer, from files, contacts, documents, to music and apps. This feature is currently in it's beta phase and will be released later this year.

Can you name one particular project that the R&D team has been really proud of?

Our team here tests several features through the year via the multiple beta tester groups, some of which are successfully rolled out, while others may not make the final cut. Providing a clean user experience has always been a core pillar and prerequisite for every feature that constitutes a device, with the aim of making the user experience more intuitive in the final build. For the global audience, the India R&D team has contributed immensely to the software development efforts for the OnePlus 8 Series and led OxygenOS development on the OnePlus Nord, which included development towards camera software, 5G network optimizations and OxygenOS customizations.

A proud moment for the India R&D team would definitely be spearheading the software developments on the OnePlus Nord. The team in India worked tirelessly on over 500 software builds of OxygenOS. With each build, the team conducted a series of software tests to ensure a burdenless user experience, before releasing the final software build for the new OnePlus Nord device. In addition to this, the development of cutting-edge features like Cricket Scores, OnePlus Scout and Work-Life Balance, as part of an overarching effort to explore the possibility of making the user experience more innate to the Indian audience. 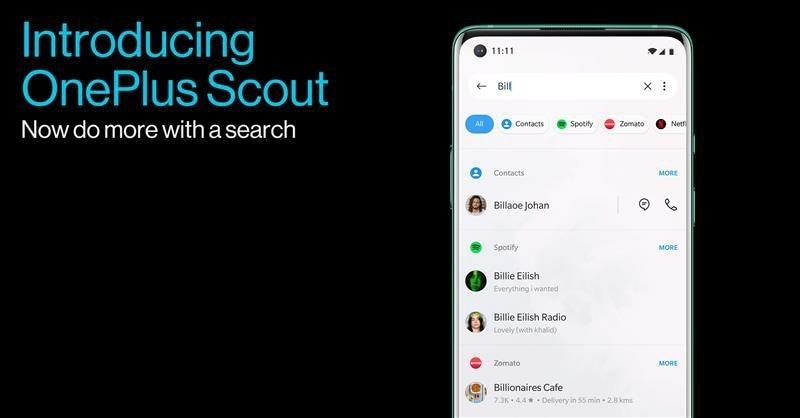 What is the idea behind innovations such as OnePlus Scout and how has its journey been like?

The OnePlus community is actively engaged with the brand and shares their feedback and expectations on a regular basis which in turn help us work toward further refining our product offerings and elevating the OnePlus user experience. OnePlus Scout has been well appreciated by our users and has received an extremely positive response. The project is currently piloted in India, one of our central markets and also the one with the biggest user-base.

For OnePlus Scout, it allows you to shave seconds off your experience, accessing a movie, photo, song in a single swipe instead of 3 clicks or more. We believe that this feature will play a significant role in building a faster, smoother, and more holistic user experience. Features like OnePlus Scout have been specifically curated to assist users interact with their devices in a more intelligent and burdenless manner, while maintaining the clean Android experience.

Can features such as OnePlus Scout and OnePlus pay create a more localised and rich user experience for users in India?

At OnePlus, our approach to software has always focused on keeping the experience unified and global at its core. Region specific features such as Cricket Scores and Work-Life Balance were first introduced to the India market as part of a pilot to explore the possibility of making the user experience more innate to the Indian audience. Having received immensely positive feedback, features like OnePlus Scout and Work-Life Balance might, based on performance feedback, be extended to other regions as well.

We first announced OnePlus Pay, OnePlus' NFC based digital wallet and mobile payments solution, in September 2019. As with all our features, OnePlus Pay is also being subjected to several rounds of testing to ensure OnePlus' promise of a fast and smooth experience. This is another feature that is being developed entirely out of India.

Nonetheless, these developments are targeted at creating a burdenless experience irrespective of regions. While these will enable a richer experience on the Oxygen OS, we always look forward to providing an unified experience to our community with features which resonate worldwide.

What are the OnePlus R&D team's future plans for India? Are there any new innovations that we can look forward to?

We have recently announced the OxygenOS 11 Developer Preview 3, which gives our more technically inclined users insight into what they can expect in the coming months and a direct channel to feedback directly with our OOS team.

The need for an Always-On Display is a feature our community has been very vocal about. To this end, we have collaborated with Parson's School of Design and seeked inspiration from some of the brightest minds in UI design to bring the much awaited Always-On Display to OOS11. The OOS11 Always-On Display has been optimised to fit right into the OOS DNA, providing an experience which is new yet familiar. We are looking forward to rolling out OOS11 in the coming months.

For India, we will be rolling out OnePlus Scout, along with Work-Life Balance 2.0 and OnePlus Sports in the future that will now include football scores.