Tesla has suspended the use of Bitcoin for the sale of its electric vehicles due to the environmental impact of Bitcoin mining. The company says that it is looking at other cryptocurrencies that are environmental-friendly as an alternative. Tesla has suspended the use of Bitcoin for the purchase of its cars. The update has been shared by Tesla CEO Elon Musk, just over a month after the US-based electric vehicle started accepting Bitcoin as a payment option.

In a statement shared by Musk on Twitter on Wednesday, the company cites environmental reasons for stopping Bitcoin payments. As a result, it will no longer accept cryptocurrency as payment for Tesla cars.

"Cryptocurrency is a good idea on many levels, and we believe it has a promising future, but this cannot come at great cost to the environment," the statement reads. 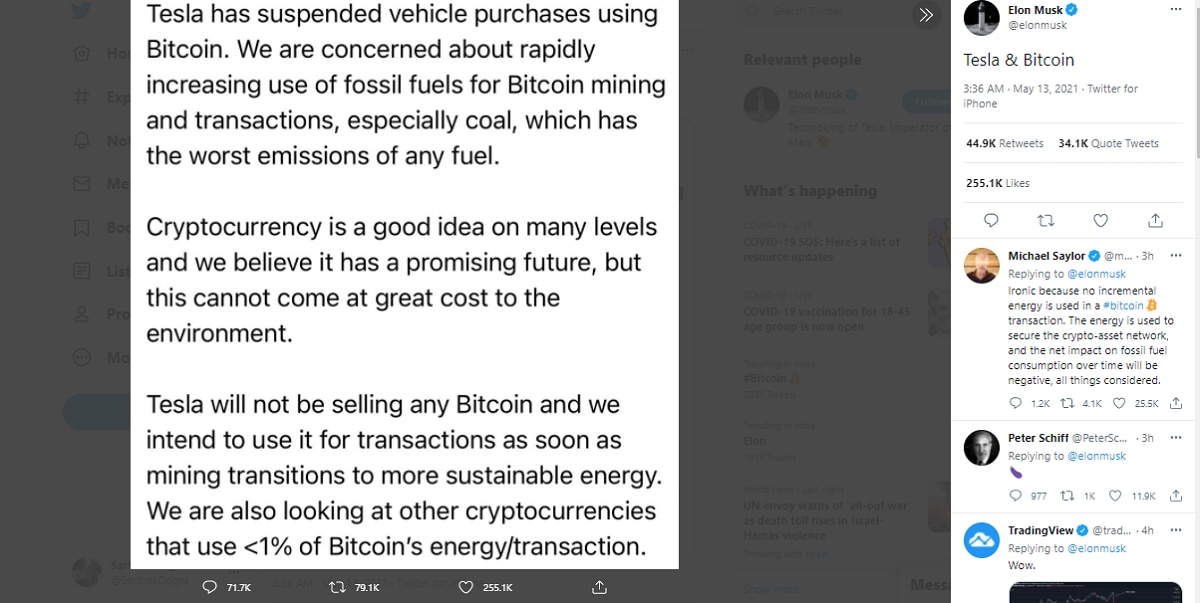 The underlying principle is that Bitcoin mining requires a huge amount of computing prowess, which is usually met by powerful computing machines. With the increase in the value of Bitcoin, or cryptocurrency in general, mining of cryptocurrency has become much more profitable. Hence an ever-increasing number of operations are being carried out.

As these machines require electricity to run, they gradually become a load to bear for the existing power supplies. Bitcoin-mining operations around the world collectively use around a hundred and twenty terawatt-hours of energy every year, about the same as some countries.

Note that cryptocurrency mining is only as bad as the source that powers the electricity for the operations. If the electricity powering the mining operations is produced through coal, it is bound to have a huge environmental impact. If the same electricity is provided through harnessed solar energy, the impact can be reduced to near negligible amounts.

Tesla hints at this in its statement. It says that it intends to use its own $1.5 billion worth of Bitcoin in the near future when the mining is powered by a more sustainable energy source. This means the company will resume Bitcoin payments at some time in the future, provided the environmental conditions are met.

For now, Tesla is looking at other cryptocurrency alternatives that use less than 1 per cent of Bitcoin's energy or transactions. If it is to double down on one, that crypto shall be the new Tesla payment option for buyers.

Also read: | Shiba Inu coin is being hailed as Dogecoin killer and it has already given 1900 pct returns in one week
Also read: | Elon Musk puts Twitter poll to check if Tesla should accept Dogecoin and this is what it means for you
Also read: | Dogecoin warns users to not fall for scams that claim to double or multiply coins