Such is the state of the desktop computers in India that for most people the best general-purpose computer to buy is the new Mac Mini, paired with a monitor of choice. All thanks to the Apple M1 processor. 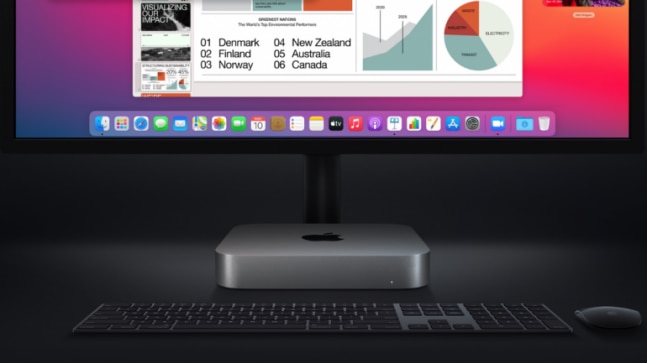 Some days ago, I reviewed the new MacBook Pro 13-inch, the one powered by the Apple M1 processor. This is a fabulous laptop offering excellent performance and useful feature set, and I believe anyone who buys it will be more than happy with it, particularly with its battery life, speed and the way it runs cool. But it is also an expensive machine. So, what if you don't want to spend Rs 122,900 on the MacBook Pro. The second option is the new MacBook Air, which too uses the M1 processor and is more or less similar to the Pro. It costs Rs 92,900. That too is expensive, and both of them are laptops. What about the desktops? Enter the new Mac Mini.

Earlier, I mostly dismissed Mac Mini. This is because usually, users have been able to get a better and faster Windows computer at the same price. But now the picture has changed. First, there is the Apple M1 processor inside the Mini, which makes it extremely fast, faster than most general-purpose computers at its price point. And two, for various reasons good computers have become extremely expensive.

My main computer at home is a machine that I assembled in 2012. It is old. Given that I live in the dusty and polluted NCR, its chassis is so full of grime and lint that I dare not open it. I think a couple of case fans have failed, and the ones that still spin make audible noise. One of its front USB ports doesn't work. Hard disks are full, and I find that 8GB DDR3 RAM, running at meagre 1600MHz, is insufficient for applications like Lightroom. But it still feels like a speedy computer, even compared to some new desktops and laptops that I use. There are two reasons: One, the core components in it are extremely good, reliable and well-matched. This computer cost me around Rs 1.25 lakh in 2012. And two, there has not been much progress in terms of core computer hardware for regular users. The only part that has made real progress is the storage where SSDs using NVMe interface have brought incredible performance gains.

So, now in 2020, or for that matter in 2021, if I decide to move to a new desktop, I don't have many good options. The only machines - and these will be machines that will give me a real upgrade feel over my existing computer - that I will consider are computers based on AMD Ryzen 5000 series, or probably the upcoming Intel Rocket Lake processors. And these computers are going to cost a lot. Even basic computers based on Ryzen 3000 series CPUs or Intel 10th-gen processors cost close to Rs 1 lakh once you factor in the price of Windows 10, the software you are going to need and use, and quality components, like motherboard supporting W-Fi and Bluetooth, that you will have to pick.

And this is for a general-purpose computer. Not a gaming PC or a workstation.

Effectively, what I mean to say is:

1- The computer performance has remained stagnant for years, particularly in the mainstream market where Intel and AMD have failed to offer significant gains to users.

2- The price of good computer hardware has gone up significantly. This means if you are assembling a computer, set aside at least Rs 1 lakh. And if you want a top of the line processor like Ryzen 5950, that chip alone will cost above Rs 70,000 (MRP is Rs 60,990, but supply is low, demand high so price gouging is going on.) In fact, in India price gouging is going on with all good PC components. A Seasonic PSU that costs $150 in the US costs Rs 40,000 in India, that is if at all you can find it.

3- If you are looking into the market for a pre-built desktop computer, all the good ones cost close to Rs 1 lakh, which is if you can find something good. Otherwise, companies like Dell and HP are selling computers that cost above Rs 40,000 and have just 4GB RAM.

The current market scenario for desktop computers means that the new Mac Mini suddenly makes a lot of sense. The M1 processor ensures it will offer sublime performance, or in other words good enough to even let users edit a 4K video without any hiccups. Compared to almost all mainstream desktop processors, the M1 is faster in general-purpose computing. And that 8GB, as I said in the MacBook Pro review, doesn't feel as limiting as 8GB in an Intel processor.

Even the price is quite good. At Rs 64,900, it is a compelling option. But of course, there is a fine print. This price doesn't include some stuff that you will have to buy along with the Mini to use it. You will need a monitor for it. As well as a keyboard and a mouse. Good monitors can cost between Rs 10,000 to Rs 1 lakh, depending on what you want. A 24-inch Dell P series monitor with IPS display costs Rs 13,000. It's an excellent option for most users, so let's consider it. Logitech's wireless keyboard and mouse combo is another Rs 1500. The base variant of the Mac Mini has 256GB storage, which means you will need an external hard disk to use with it. So, let's also get a 1TB hard disk, which will cost another Rs 3500.

The total comes to a little less than Rs 82,000. For a fast and up-to-date computer with a large 24-inch monitor, this is a fairly reasonable price to pay.

Then there are other considerations:

-- With Mac Mini, there is no hassle of buying Windows and or worrying about the next OS upgrade. The macOS makes the whole thing transparent to users.

-- You don't have to purchase Microsoft Office (in most instances), or for that matter photo editor, because the bundled apps like Photos, iMovie, Pages, Numbers, Keynotes etc are competent and full-featured programs.

-- The Mac Mini looks slick and is extremely compact. It weighs 1.2kgs. Compared to a PC tower it is tiny.

-- It consumes a fraction of power that a PC does. Keep it running 24X7 and it will have no effect on your electricity bill. You can't say the same for a powerful PC nowadays. The TDP of most mainstream processors -- and this is just one component -- is between 65W to 95W. The new Mac Mini, according to Apple consumes, 39W at max. The figure for Mac Mini 2018 with Intel processor was 122W. No, I am not going to get the Mac Mini. But my reasons have nothing to do with its merits. For the last 20-odd years I have always assembled my own computer, and for now I am going to continue with that. I want to handpick the components, so I can customise every aspect of the computer that can still be customised. But if I am looking for a pre-built desktop computer that is fast, power-efficient, works well, looks good, and has a reasonable price, the Mac Mini is an easy choice.

There is only one case where Mac Mini is not a good option for most consumers. And that is if they want a gaming PC. A Mac is (still) not a gaming machine like an Alienware computer, but do understand that good gaming computers cost a lot. Like a lot. If you want something to play games, Microsoft Xbox X and Sony PS5 are better value for money.

In other words, if you are looking for a desktop computer for home use, which is working from home, or just want a computer on which your kids can study, or on which you can stream stuff or browse web, or create your office reports, or write your book, or run your business, right now you cannot do better than the Mac Mini paired with a good monitor. There are cheaper machines available but they are cheap for a reason. There are more expensive computers as well in the market but in most cases they don't offer much above what the Mac Mini does.

For many people, particularly people like me, who have spent their life with a Windows and Intel computer, Mac Mini is an unusual choice. But all things considered, it is the best choice right now.