An alleged iPhone 9 has been spotted in the wild, showcasing its iPhone 8-like design. iPhone 9 could end up getting a flat frame similar to the iPhone SE. 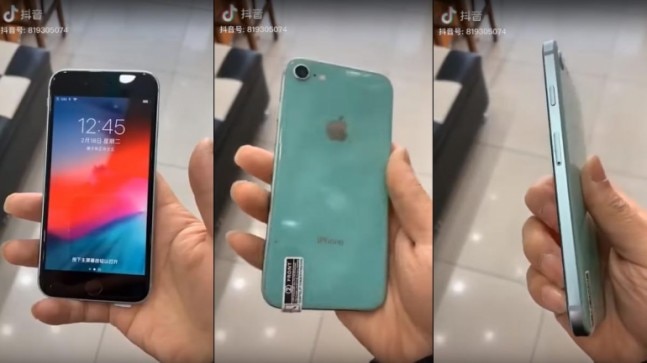 The iPhone 9 may not be the most cutting-edge smartphone to launch this year but it is certainly the most hyped phone the world might see. Several leaks and rumours in the recent past have suggested that the iPhone 9 will come in as the successor to the iPhone SE from 2016 and it will be Apple's low-cost iPhone for the developing markets where affordable phones are preferred over anything else. Most specifications and even a few leaks have been circulating the web, and after many months, our first look at a prototype iPhone 9 is here.

A YouTube channel going by the name of Sparrow News has shared a TikTok video that shows an Apple device that is alleged to be the iPhone 9. The video shows all the sides of the iPhone and from what we see, it looks notably different from the existing renders shared by OnLeaks a few months ago. It still echoes the design choices of the iPhone 8 but it doesn't leave its iPhone SE roots.

From the front, it looks like an iPhone 8 with similar thick bezels as well as the old-school Home button that houses the TouchID fingerprint sensor. The panel appears to be slightly bigger than the iPhone 8, which explains the recent leaks suggesting a slightly larger 4.9-inch display instead of the 4.7-inch display on the iPhone 8.

It's the side frame where things change. The iPhone 9 is shown flaunting flat frame similar to what the iPhone SE featured. The frame consists of the usual set of buttons, i.e. a power button and two volume buttons along with the Mute slider. There's no headphone jack but you still get a Lightning port and a speaker grille that's accompanied by a mic grille. The rear of the phone tries to echo the same design as the iPhone 8 but due to the flat frame, it appears bigger. There's a single camera setting in the top left corner and it has a considerable bump, suggesting the same camera hardware as the iPhone 11. The handset also comes in the same teal colour that you find on the iPhone 11. Even the frame is painted in a lighter shade of teal similar to the paint scheme on the iPhone 11.

The phone is shown running on the latest iOS 13. The video also shows the TouchID in action, unlocking the phone and going to the Home screen.

It is difficult to figure whether this is a fake or a real prototype of the iPhone 9 undergoing testing in China. The original renders of the iPhone 9 showed a curved frame similar to the iPhone 8 but this one has a flat frame. This could either be just another prototype that may not make it to production. Or, the renders got it wrong and Apple might be sticking to flat frame for the iPhone 9, indicating a shift to the classic iPhone design for this year's iPhone models.

If this iPhone 9 or iPhone SE 2 starts at $399, it could end up selling like a hotcake given the iPhone 11-like specifications. However, the iPhone 9 has to compete with a lot of affordable Android flagships and all of them come with modern edge-to-edge displays as well as better designs. Apple will have to bank on the powerful internals to get the iPhone 9 selling in developing markets.

Larry Tesler, man who created cut-copy-paste and paved for Apple Mac, dies at 74