This luxe, golden PlayStation 5 edition is the PS5 of your dreams

Caviar, the company behind outlandishly designed gadgets, has come up with a gold-plated version of Sony PlayStation 5. 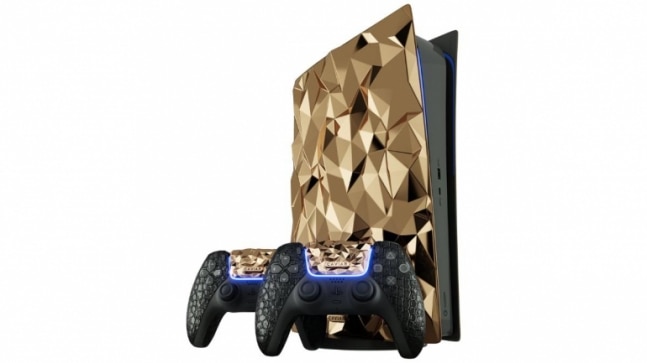 If you thought Sony's latest PlayStation 5 could not be more elusive, think again. Caviar, the Russian company that puts the premium on gadgets, has reimagined the PS5 in the most bizarre way possible. It has launched the Sony PlayStation 5 with 18-Carat gold plating all over. If that was not enough, the DualSense controller is clad with crocodile leather. This ridiculously luxe model is called Sony PlayStation 5 Golden Rock Edition.

The Sony PS5 Gold Rock Edition uses 20kg of gold in making the outer body of the gaming console. This obviously makes the console heavier than the regular edition that is available in certain markets but not in India yet. There is also a hint of gold in the controller on the inserts, which although uses crocodile leather on the grips. The name of the company "Caviar" is imprinted on the gold surface on both the console and the controller. That is an insane amount of gold to be just kept in your living room or bedroom because you will use the console to play games.

The outlandish look aside, there are no other changes to the Sony PlayStation 5. Specifications-wise, it is the same having 1TB of storage, support for ray-tracing and up to 8K resolutions, and more. It is just the customisation is done to make the console look monumentally luxurious. "The case of this exclusive gadget is made in the original jewelry technique, which adds volume and texture to the model. The inspiration for the designers was the unique geometry of the gold ore and the graceful, beautiful outlines of the rock. That is why the console was named Golden Rock," according to Caviar.

Caviar has not said anything about the price but you can imagine how much this console is going to cost. But in case, it may go for not less than EUR 1 million, which is roughly Rs 9 crore. In case you are filthy rich and want to own one, you can request Caviar to contact you on the purchase of the Sony PS5 Gold Rock Edition.

Besides, Caviar has announced it will launch three more products going into next year. Apart from the Sony PlayStation 5, there are Jordan shoes with gold studdings, Apple AirPods Max with gold-made covering and beadings, and the Samsung Galaxy S21 with its entire back made of gold. Although a lot is not known about these products at this point. Caviar will release them next year.

Coming back to reality (please don't mind my sarcasm), Indian gamers are still disappointed because the PlayStation 5 is not available yet. Despite seeing a successful launch earlier this year, Sony PlayStation 5 consoles have not hit the market this year. Although, it is rumoured that Sony might announce a release date soon and the PS5 will be available in limited quantities through both online and offline channels.