TikTok, some other Chinese apps slip in app store rankings in last month in India

TikTok and a couple of other Chinese apps have slipped in the apps store rankings in the last few weeks. This could be due to "boycott china" campaign that some Indian users are running. It seems that the growing chorus to boycott Chinese products because of Beijing's aggressive posturing in Ladakh has hit popular Chinese apps like TikTok in Indian market, data shows.

But, the lesser-known applications developed by the Asian giant have, ironically, witnessed growth in their rankings around the same time, according to industry statistics.

Data from the Finland-based mobile-ranking platform, AppFollow, indicates that applications like TikTok have borne the brunt of Indian anger over Ladakh tensions.

The popular short-form video app was ranked 5 in top-ten free applications on Apple's platform in India before the May 5 scuffle between Indian and Chinese troops.

A month later, TikTok slipped down to number 10 on App Store.

Among Android users, the same Chinese application dropped from number 3 to number 5 in India ranking.

But it still remains on the list of top-ten popular apps in India.

However, at the same time must be added that TikTok could also have been impacted by a campaign that some Indian YouTubers ran in the last month after a virtual fight between YouTube users and TikTok users. TikTok was given millions of one star reviews by Indians supporting YouTubers, leading to TikTok's rating come down to 1.2 stars. Google later deleted these millions of reviews.

Another popular Chinese application, SHAREit, has witnessed a decline among Google's Android phone users -- from number 11 earlier to number 16 now.

Helo, a fast-growing Chinese content-sharing and social-networking application, also reported a slip among iPhone users, moving down from 30 to 42 in the rankings.

On Android, Helo is out of the top-ten category of free apps, sitting now at number 12 from 8 earlier.

But lesser-known Chinese applications, on the contrary, grew in the Indian market during the same period.

BIGO LIVE, controlled by top Chinese streaming platform YY, for instance, rose from number 22 to number 10 in the top-grossing mobile applications in India among iPhone users. 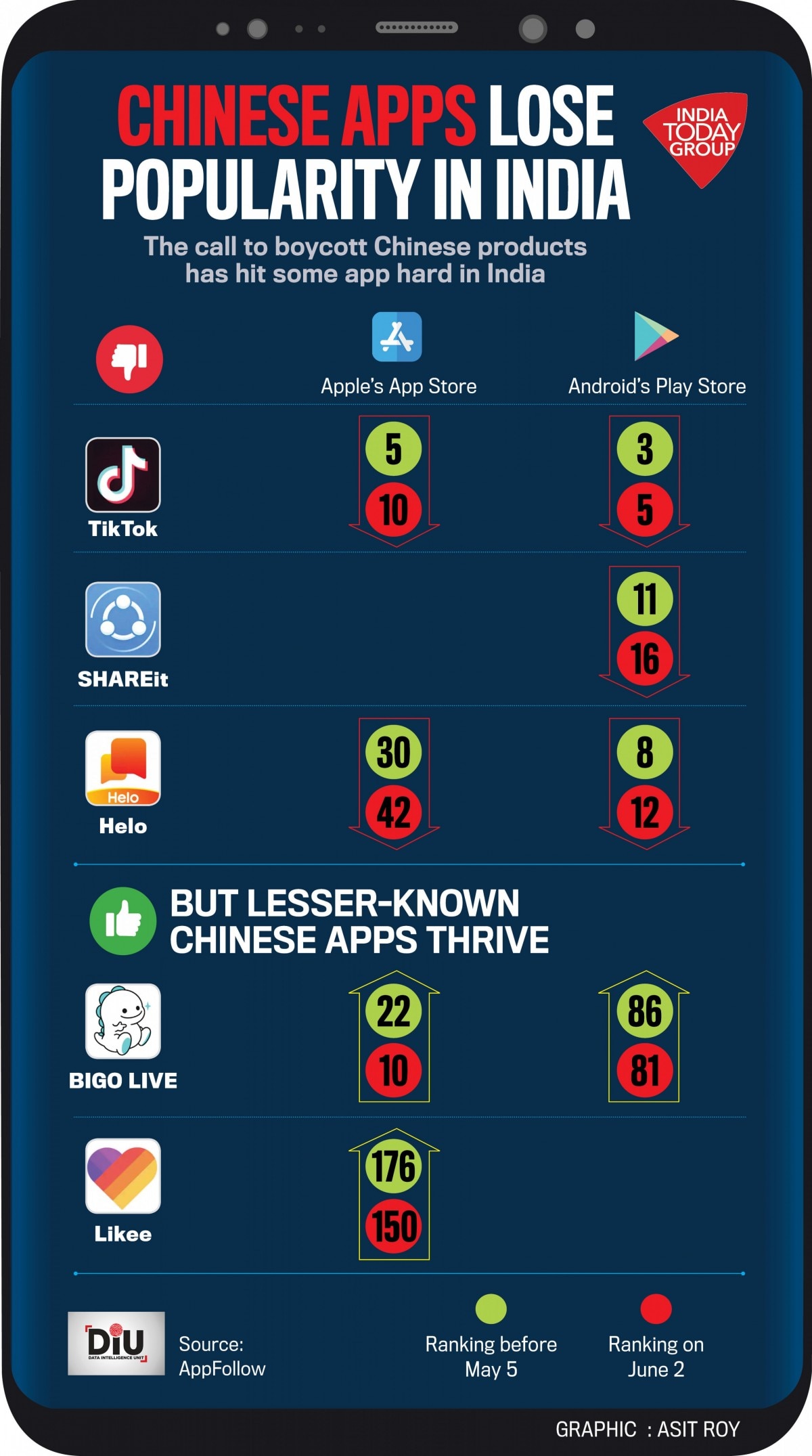 The platform also witnessed a gain among Android users, where it jumped from 86 to 81 in the top free application category.

A new Chinese rival of TikTok called Likee, run by Guangzhou-based JOYY, improved its user-base among iPhone users, climbing to 150 from 176 in the free-app list.

There is no clear evidence to suggest Indian users have shifted to other platforms permanently.

On Tuesday, Google removed Mitron app, the touted Indian alternative for TikTok. Earlier, experts had pointed out flaws with its security and had found evidence that the app was actually made by someone in Pakistan. The app's privacy, content and spamming related policy was also under the scanner.

It is not yet known if the app will be listed again on Playstore.

Google also removed a recently-launched application, which helped users identifying and uninstalling Chinese applications from the phones. Created by Jaipur-based technology firm, Remove China Apps had witnessed close to one million downloads within ten days. Its developers did not disclose the reasons behind the takedown, but said they are working on suggestions and feedbacks.

Redmi 9 could launch this month with a different MediaTek chipset, other specs remain unchanged