Twitter had earlier announced that the process would go on floors in January but things did not happen as planned. Twitter has been toying with the idea of launching a verification program. The company had earlier announced that the process would go on floors in January but things did not happen as planned. However, new reports hint that the micro-blogging site will make a new self-served Verification Request form available from next week. For the uninitiated, Twitter had halted the verification process after one of the verified users was accused of being a white supremacist.

Researcher Jane Manchum Wong has shared the screenshots of Twitter's verification forms that will be available from next week. Sharing the pictures, she wrote, "I was told by multiple sources that Twitter plans to launch the new self-served Verification Request from next week." Twitter had revealed in its blog that the self-serve application process will be available on the Account Settings page on the web and in-app. "The process will include asking applicants to select a category for their verified status and confirming their identity via links and other supporting material." 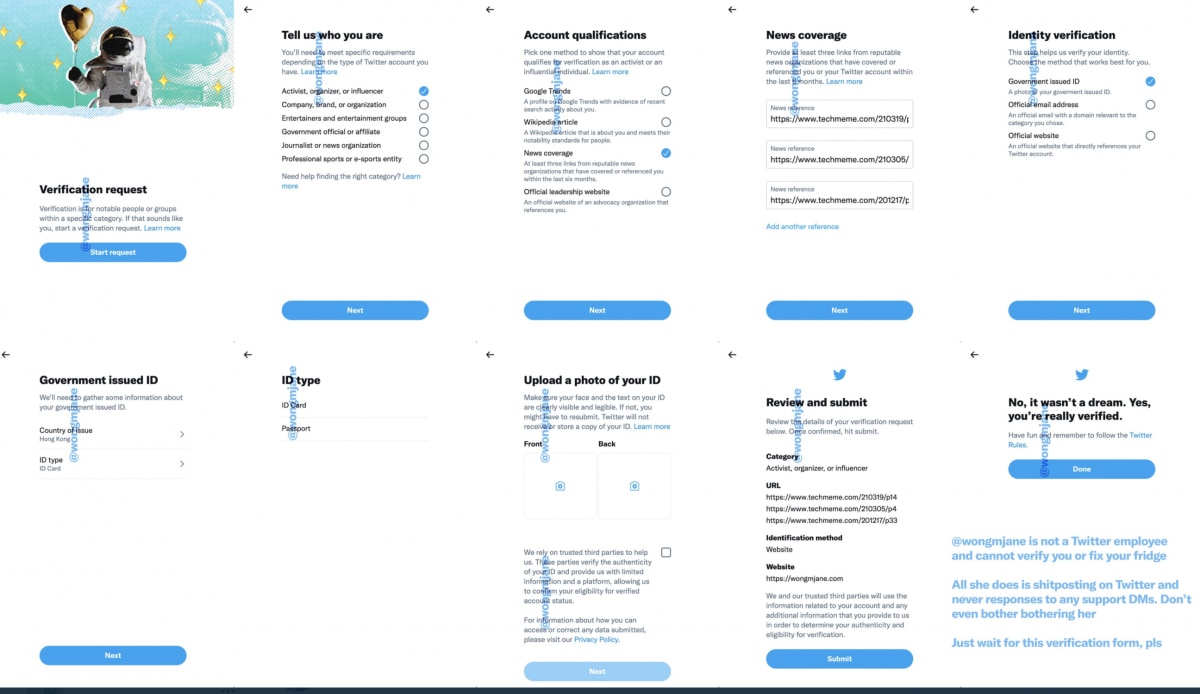 So if you wish to apply for a blue tick for your profile, you will have to go to the Account Settings menu, then tap on the Request Verification option. Do remember that you should belong to the following categories including Government, Companies, brands and organizations, News organizations and journalists, Entertainment, Sports and gaming, Activists, organizers, and other influential individuals to get a verified profile. So while filling up the verification form, the user will have to confirm his identity and provide various links to verify his identity and details related to his work.

Twitter had noted that it would take the help of the technology as well as require the human view to verify profiles. "We also plan to give people the option to share demographic information after completing the new verification application so that we can better measure and improve the equity of our verification process. We'll share more details about the application process soon," the company had said in its blog.

Twitter has stopped granting verification badges to users in 2017 following the outrage over the verification of the profile of a white supremacist. The company clarified that verifying is not a form of endorsement and Twitter does not endorse anybody by adding a blue badge next to their profile. However, Twitter continued to verify users despite the pause but the process was internalized.

Google Pixel 6 looks bold in leaked renders, may have a Pro version not XL