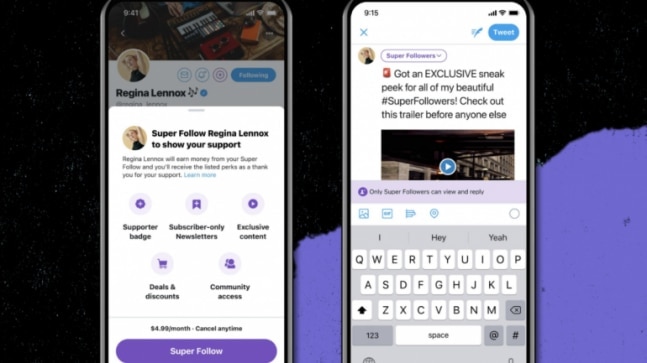 Twitter announced a couple of features during an Analyst event. The micro-blogging site announced a paid subscription service called Super Follow. Twitter has been rumored to be working on its paid subscription service to increase revenue. The Super Follow feature will provide access to exclusive deals, content to creators for a monthly sum. Apart from this, Twitter is testing a new called Safety Mode and more.

Twitter's Super Follow mode will provide an opportunity for creators to earn money on the platform. Twitter will charge the followers and give them access to exclusive content including tweets, a badge indicating support, subscription to newsletter, and more. Twitter would charge a monthly amount of $4.99 for a Super Follow subscription. This will help the publisher earn money from his fans.

"Exploring audience funding opportunities like Super Follows will allow creators and publishers to be directly supported by their audience and will incentivize them to continue creating content that their audience loves," Twitter said in a statement. Twitter has not officially rolled out the Super Follow feature yet.

Twitter has also announced a Facebook group-like feature called Communities. Although Twitter has not shared much about this feature, it has something to do with a lot of people at once. People can create groups about topics and people who share the same interest can join the group. The feature would be the same as how it happens in Facebook. For instance, if you want to either create a group about dogs or join a group that is about dogs. You will be able to do that with twitter's communities feature.

"This year, we're making it easier for you to discover, participate, and form conversations with communities that share your interests," a Twitter spokesperson told Recode.

Apart from this, Twitter is also said to be working on a feature called Safety Mode that would block potentially harmful tweets. As per reports, this feature once turned on would block "automatically block accounts that appear the Twitter Rules, and mute accounts that might be using insults, name-calling, strong language, or hateful remarks," the company revealed during an analyst event. This will stop the account in concern from tweeting at you for seven days straight.