Twitter is testing a new feature that would let you check the bio of a user when you reply to them. 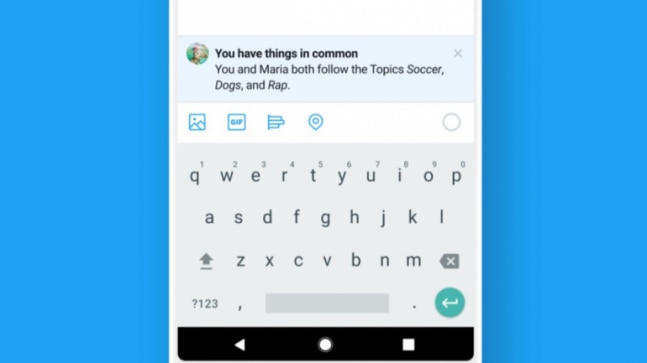 Twitter is testing a new feature that would let you check the bio of a user when you reply to them. The company said that the feature will only be rolled out to Android users for now. If made official, this could let users know a little something about a person they are interacting with on Twitter.

Announcing the feature, Twitter wrote," Sometimes you have more in common than you think. On Android, we're testing a way to highlight things you have in common when you reply to someone you don't follow or engage with. We may show the Topics you both follow, your mutual connections, or their profile bio."

For instance, if you are replying to a political figure or an actor's tweet, as soon as you enter the reply window, you will be shown a brief bio of the person you are replying to. Apart from the bio, if you both follow the same topics or follow the same people, you will be shown that too. The pop-up would appear right above the comment box. However, this is not a label nor does Twitter want you to skip replying to the tweet, it just gives a little information about the person you are interacting with.

On a related note, Twitter is reopening its verification portal. This means that the users can now submit a verification request three years after the process was suspended. The company in the blog said that the verification process would begin in January 20, 2021."We are excited to relaunch public applications for verification in 2021 through a new, self-serve application process that will be available on the Account Settings page on the web and in-app. The process will include asking applicants to select a category for their verified status and confirming their identity via links and other supporting material," Twitter said in a blog.

Twitter had discontinued verifying accounts or profiles in 2017 after outrage over the verification of a white supremacist. The company clarified that verifying is not a form of endorsement and Twitter does not endorse anybody by adding a blue badge next to their profile. However, Twitter continued to verify users despite the pause but the process was internalized.

Twitter would verify the accounts of government officials, political figures journalists, brands, activists from January 2021. However, it will use both automated and human review processes to verify.

Tech in 2020: WiFi and home broadband gets its due