Twitter will now start warning users before they post offensive tweets. The feature was being tested a year ago, but it will now be rolled out to a wider audience. 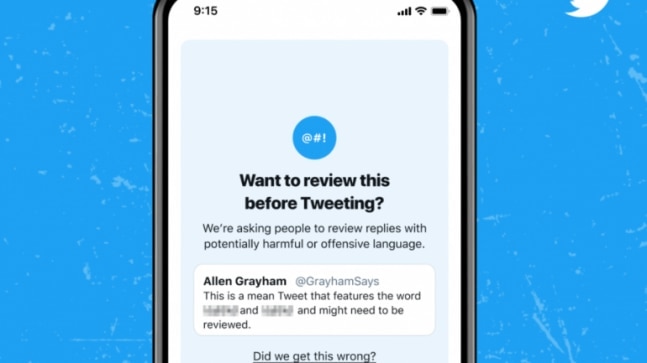 Twitter is rolling out a much-needed feature that would stop users from spewing venom on the platform. Twitter is one of the most badly used platforms, often used for trolling or harassing users. However, now the micro-blogging site will not let users who post offensive tweets pass off easily. Twitter will now start warning users before they post offensive tweets. The feature was being tested a year ago, but it will now be rolled out to a wider audience.

Back in 2020, Twitter had started testing the feature with a small group of people. The test which was conducted by the company prompted users to reconsider before posting a potentially harmful tweet. However, after months the feature will be available to users across platforms.

"Starting today, we're rolling these improved prompts out across iOS and Android, starting with accounts that have enabled English-language settings. We began testing prompts last year that encouraged people to pause and reconsider a potentially harmful or offensive reply — such as insults, strong language, or hateful remarks — before Tweeting it. Once prompted, people had an opportunity to take a moment and make edits, delete, or send the reply as is," Anita Butler, Director, Product Design and Alberto Parrella, Product Manager on Twitter said in a blogpost.

As per Twitter, initially, people often received prompts even when they engaged in friendly banter with a friend but now Twitter has worked on its algorithms and collected feedback from the users to improve the feature. The test results reveal that when users were prompted about offensive tweets, over 34% of people revised their initial reply or decided to not send their reply at all. 11 percent of people composed fewer offensive replies.

Twitter has also laid out a number of situations when it will send reminders to users. The micro-blogging site said in the blog that they are improving their technology to detect profanity, strong-language more accurately. However, Twitter might not send prompts if two people follow each other and are interactive, and have a better understanding.

"We will continue to explore how prompts — such as reply prompts and article prompts — and other forms of intervention can encourage healthier conversations on Twitter. Our teams will also collect feedback from people on Twitter who have received reply prompts as we expand this feature to other languages. Stay tuned for more updates as we continue to learn and make new improvements to encourage more meaningful conversations on Twitter," the Twitter blog read.

Dogecoin now giving 8000 pct returns, watch it closely for next 2 days because Elon Musk is Dogefather