The Vivo Apex 2020 is expected to feature a 6.45-inch display with a 120-degree curve on both sides. The panel is also said to support 120Hz refresh rate. 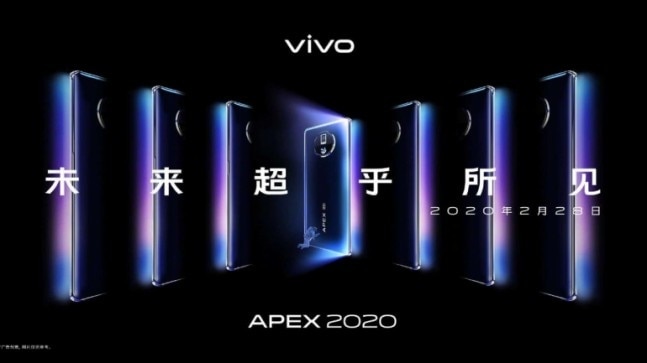 One of the biggest smartphone makers in the world, Vivo, is all set to launch the much-awaited Apex 2020 smartphone. The phone was initially scheduled to launch at the Mobile World Congress 2020 in Barcelona. However, with the event now being called off, the company has revealed a new launch date for it -- February 28.

Like a number of other big-ticket launches in the past week, even the Apex 2020 will be launched via an online launch event, with Vivo also sharing a few teasers ahead of the launch to drum up interest in the device.

The Apex series of phones in the past have been at the forefront of showcasing the latest innovations being made by Vivo in the world of tech, and this year too, the Apex 2020 is expected to carry forward that legacy.

While little is known about the features and specifications of the device, the teasers shared by the company have given us a sneak-peek at the design of the device. The teasers show a clean looking front and back, with no ports on it much like the Apex 3 from last year.

The front of the device is expected to feature a 6.45-inch display with a 120-degree curve on both sides. There are also reports that this display will support up to 120Hz refresh rate with the sides of the device featuring second-generation pressure-sensitive on-screen buttons.

But that's not it. The Vivo phone is also said to bring with itself new camera features with the back of the phone featuring a circular rear camera module. At the top of the device, there also appears to be a periscope lens.

While nothing is confirmed, rumours say this setup could bring up to 7.5x optical zoom to the smartphone. This lens is said to be sitting next to a second 48-megapixel camera that is being called a Gimbal Camera.

For now, there is little else that's known about the device. However, more is expected to be known in the coming days.