WeTransfer banned in India: Check outother alternatives to the app

Popular file-sharing app WeTransfer was banned in India by the Department of Telecommunications (DoT) citing national interest and public interest as the reasons for doing so. 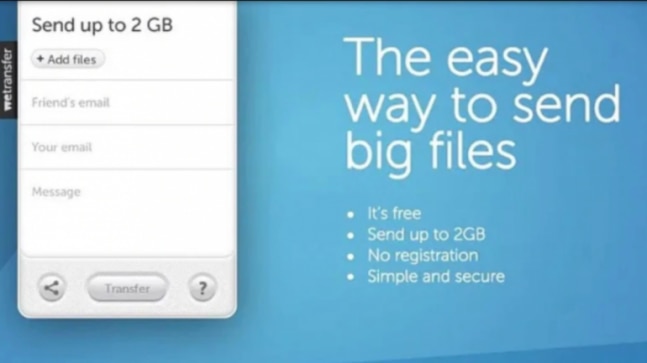 Popular file-sharing app WeTransfer was banned in India by the Department of Telecommunications (DoT) citing national interest and public interest as the reasons for doing so. As per reports, DoT sent the notice to the Internet service providers to ban the WeTransfer website. The application was used to transfer files up to 2GB to the recipients.

It is practically impossible to send files on emails that are more than 1GB but with apps like WeTransfer, users could send heavy files including videos and images. So now with WeTransfer, here are some of the other options that you can use to transfer large files quickly.

The most secure and easy way to transfer heavy files over emails is by using Google Drive. If you have a Gmail account, you already have access to Google Drive with 15GB storage. To send a heavy file, you need to upload the video, file, or whatever that you want to transfer. After uploading the material, you can generate the link of the same and share it with people over the email. You can give permission to people to view and edit the files. This could be one of the easiest ways to transfer files as you wouldn't have to download any external apps to do so. However, Google Driver does not have all the features of WeTransfer but can turn out to be a decent alternative to the app.

Smash is pretty similar to WeTransfer and could be a useful tool if you have some very large files to send. The apps are available free of cost and there is no limit on the size of the file. You can simply drag and drop your files and send it across, the website is pretty simple to handle. As a matter of fact, you don't even have to register for using the services. However, you can always password protect your files. Just like Google Drive, you can create a link to the files and share them with the email addresses.

Dropbox is one of the popular file-sharing apps, it is in fact a better alternative to the WeTransfer app. You can sign up for free on the website and can also download the app. You will be given free 2GB storage space but it is expandable up to 2TB or 3TB with the plus and premium package. You can allow people to either view or edit the files. The recipients can even comment on the file.

This beautiful wallpaper can crash your Android phone: All you need to know