Who is Navpreet Kaloty, the dashing Sikh who presented at Apple launch event

Apple's Spring Loaded event was presented by a mix of Apple employees, amongst whom one particular presenter with an India connection and who was seen at an Apple event for the first time -- Navpreet Kaloty, a dashing Sikh. 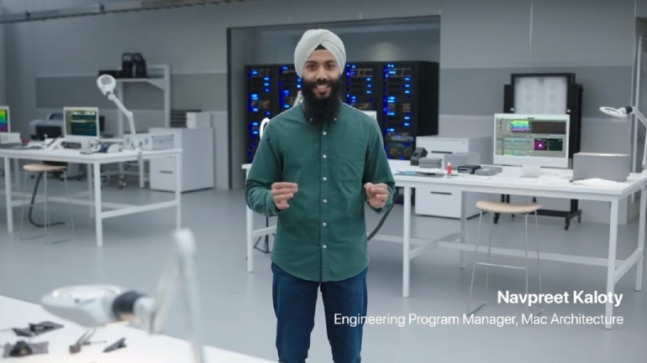 Apple had a lot in store to share with its fans during the Spring Loaded event it held last night. Other than the exciting product launches, including a new iMac, iPad Pro and more, the company focused much on the presentation aspect of the entire event. That is why we saw Apple CEO Tim Cook pulling off stunts like Tom Cruise. That is also why we saw a concerted effort towards diversity and inclusion in Apple's presentation. In particular, Apple's Engineering Program Manager Navpreet Kaloty caught the attention of Indians following the event.

Kaloty looks after Mac architecture at Apple and at the Spring Loaded event he presented the camera capabilities on the new iMac to the world.

If you saw the event, you would say that dashing Navpreet pulled it off really well too. The Apple executive is now gaining worldwide recognition for his calm and poised camera appearance during the launch. But other than what we see on the launch video, who exactly is Navpreet Kaloty, and how did he come to be the first Sikh to appear in an Apple launch event? Here is a look.

As per what can be gathered from his online presence, Navpreet works with Apple as an Engineering Program Manager at its Cupertino headquarters. The deduction can be made from the fact that he currently lives in the city of Cupertino in California. This might also have made him available for the Apple Spring Loaded presentation that was recorded entirely at Apple Park.

This is Navpreet's fifth year of working with Apple at his current designation. Before he joined the tech major way back in May 2016, he interned for around a quarter of a year with the product management team for operational excellence at Tesla.

Navpreet had held similar internships prior to the Tesla gig. In the year 2014, he worked with Suncor Energy for a total of nine months in two different departments. Prior to that, he interned for five months at a firm named 10in6 Incorporated located in London, Ontario in Canada.

As for his education, Navpreet completed his Bachelor of Applied Science in Mechanical Engineering from the University of Waterloo in 2016. He went on to pursue his Masters in Corporate Strategy from Harvard University in 2018 and is due to complete the course next year as per his LinkedIn profile.

Navpreet appears to be a grade-A student for a long time, having been a valedictorian and on the Dean's Honours List almost throughout his studies. It seems this thorough knowledge of his field has enabled him to make it to one of the biggest stages in the technology world so early in his career.