Some conspiracy theories being spreading online blame radiations from 5G towers for the ongoing pandemic, claiming that there is no Coronavirus. These have been debunked time and again, so why are people still spreading them? Have you been the recipient of a WhatsApp message telling you that the ongoing pandemic is a result of the 5G network? If not, you might have seen such a theory being shared by your known on social media platforms. It might be puzzling for some, but it won't be surprising, considering that the battle against misinformation is one of the biggest that the digital world is fighting today.

Taking the Covid-19 pandemic as an example, we have seen multitudes of conspiracy or rather thoughtless theories generate over the course of a year. Some target the patient zero and the epicenter of the pandemic. Others link the virus to almost anything you can imagine.

A recent one gaining popularity is the link between 5G and Covid-19. In fact, the theory became so viral that the Department of Telecommunications (DoT) recently had to warn Indians not to believe in such fake messages.

Just to be clear, the theory is baseless and absolutely untrue. Though if it still intrigues you, like it does so many, here is what it is all about.

What is the theory?

In essence, this is a two-part theory - one that says the 5G network is responsible for the spread of Covid-19. Another blames the network entirely for the pandemic and says that there never was a Coronavirus but a cover-up for the deployment of 5G network towers.

Needless to say, both are horribly wrong.

Supporters of the first one believe that radiation from 5G towers is helping the novel coronavirus to spread. A modification of this also claims that 5G networks weaken the human immune system, thus helping the virus spread faster. Believers of the story even torched several 5G towers in the UK last year.

The other theory states that 5G networks around the world are causing the pandemic. It points out the countries with 5G deployment - China, Korea and Italy as the epicenters of the virus. However, this is where it also goes wrong, with the peak of the Covid-19 pandemic taking place in India, where the 5G rollout has not begun yet.

Nevertheless, the theory might sound convincing to some, as it takes you deep into the structure of the Oxygen molecule, blaming 5G networks for reversing its polarity. It even states that the Covid-19 patients can be "cured" through antibiotic tablets, anti-inflammatory and anticoagulants or aspirin, as noted by Reuters in a report.

The theory makes a fake claim about WHO prohibiting autopsies of those deceased by Covid-19 and of Russia being the only country in the world to have done so and found out the "truth."

The bottom line, these theories can become confusing and probably believable for some. As an easy way out of being a victim, avoid such messages with 5G and Covid-19 mentioned together. Though a more important task will be to note how these theories are being spread.

The theories are not new and first originated during the beginning of the Covid-19 pandemic last year. They are not localised as well, as they have been seen in parts of Europe, the US, and even India, on online mediums, of course.

Some online presence has been identified publicly. Posts on Twitter and Facebook have emerged time and again from user accounts of different nationalities. One such, posted in the "About this group" column for a private Facebook group, can be seen here. 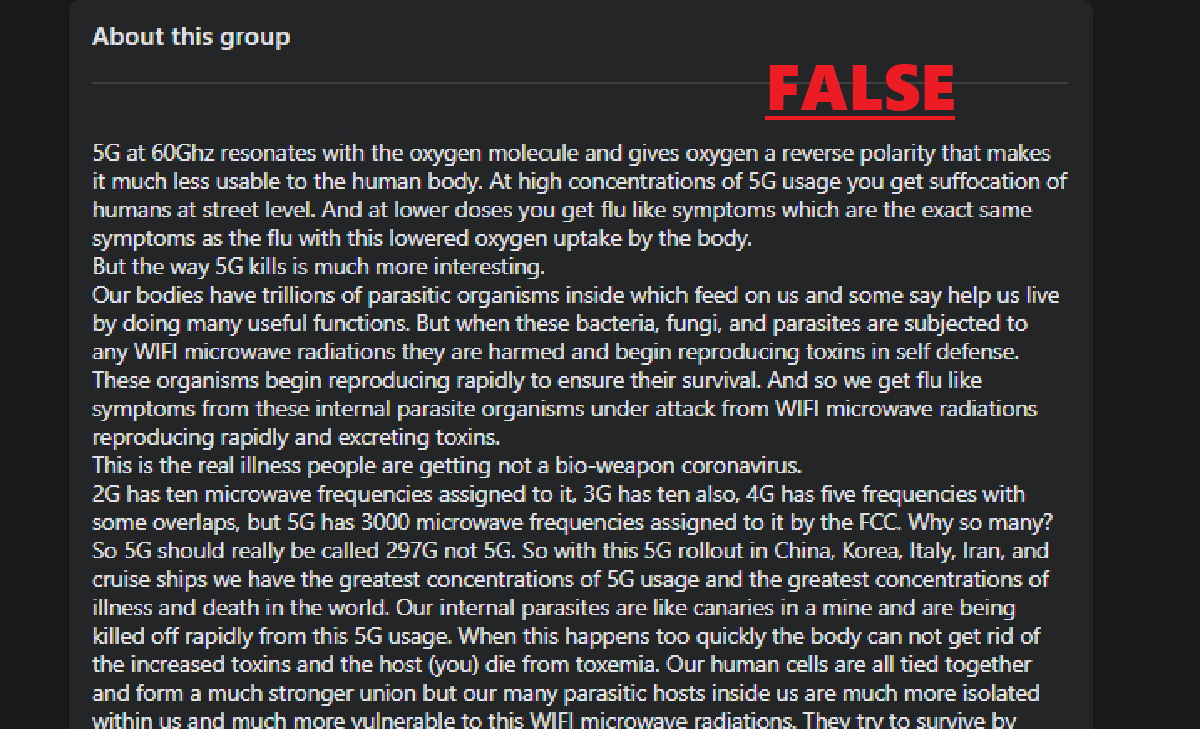 It reads, "5G at 60Ghz resonates with the oxygen molecule and gives oxygen a reverse polarity that makes it much less useful to the human body. At high concentrations of 5G usage, you get suffocation of humans at street level. And at lower doses, you get flu-like symptoms which are the exact same symptoms as the flu with this lowered oxygen uptake by the body."

It goes on to add that "all of Asia turned off their 5G" on a particular day and "left on only their 3G and 4G systems to communicate so they know 5G is the real cause of the illnesses."

In India, such theories have been spreading through WhatsApp text and audio messages. In one such audio message, a man can be heard stating that testing of 5G networks is the reason why people are dying in states like UP, Maharashtra and Bihar. The Cellular Operators Association of India (COAI) has cautioned users about the same and urged them to not believe in any such rumours.

Those gullible enough still tend to believe in it and forward it as it is. The chain of misinformation continues.

National Institutes of Health, US published research done on the spread of such rumours. Through tracking such rumours, the study attempted to gain an insight into "the dynamics of online information dissemination" and the possible ways to stop such spread.

Why can't we stop them?

The report highlights a crucial challenge in stopping the spread of such theories. It states that the fact-checked information that debunks these conspiracy theories also circulates online, but these are less consistent and "in other networks than the original conspiracist content."

It goes on to point out that even removing such content from online platforms and banning such accounts has quite the opposite effect of what is desired. It strengthens the beliefs of conspiracy theorists for whom "such interventions are proof that they are in the process of uncovering deeper secrets."

While the patterns of such misinformation spread have to be analysed in what seems to be a never-ending attempt, the currently available options are being appointed by all social media platforms. Twitter started adding fact-check clause even to the tweets of Donald Trump last year, showing its serious effort in the direction.

Though the volume of such rumours surfacing online is not matched by the pace of fact check. It is thus very important to be vigilant on our part. Fact check every such information we come across online, through public or private mediums, and make sure not to spread any false information on our own.

WhatsApp likely to introduce end-to-end encryption for chat backups, here is what it means

40 million Indians could take up 5G in first year of availability, says report